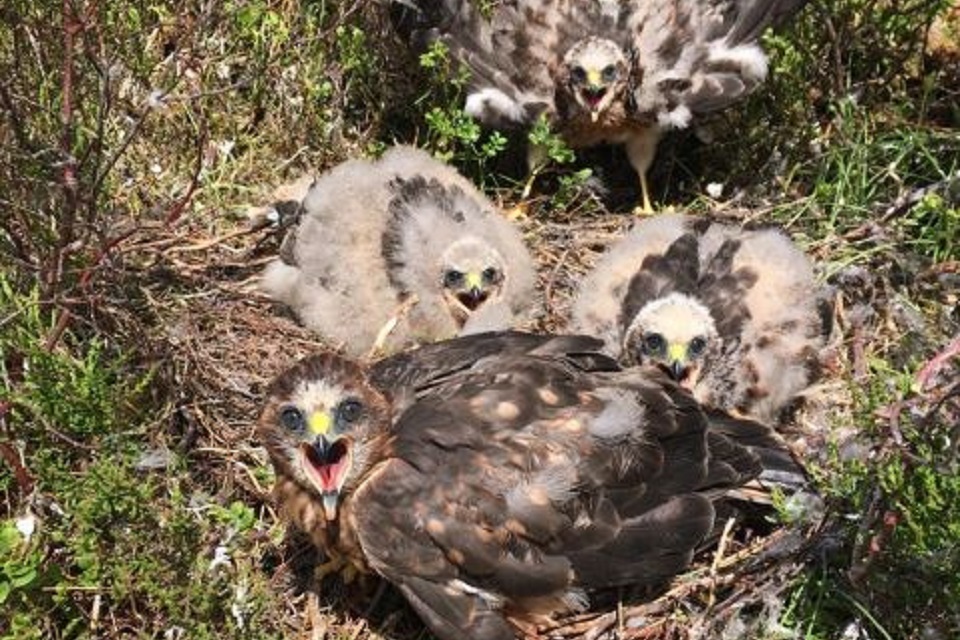 Natural England has recorded the best year for hen harrier breeding in England since Natural England’s hen harrier recovery project was established in 2002, with 60 chicks fledged from 19 nests across Northumberland, Yorkshire Dales, Cumbria and Lancashire in early summer 2020.

The success has been down to a number of factors including high numbers of voles which are a key food source, good weather, and strong partnership working between Natural England, RSPB, Forestry Commission, the Moorland Association, United Utilities, the National Trust, and others.

Hen harriers were once found across upland and lowland Britain including throughout many English counties, however after 1830 it became an exceptionally rare breeding bird in England due to raptor persecution, which was then made illegal in 1954. The hen harrier is now one of England’s rarest birds of prey.

Hen harriers are one of our most distinctive birds, with a characteristic owl-like face and stiff facial feathers that direct sound toward their ears to enable them to hunt more effectively.

“2020 has seen the best breeding season for England’s hen harriers in years and I thank all those who’ve helped achieve this wonderful result, including landowners and managers, campaigners, conservation groups, police officers and our own Natural England staff and volunteers.

“Despite the great progress there is though no cause for complacency. Too many birds still go missing in unexplained circumstances and I urge anyone who is still engaged in the persecution of these magnificent creatures to cease at once.

“Hen harriers remain critically endangered in England and there is a long way to go before the population returns to what it should be.”

This year’s success means that 141 hen harrier chicks have fledged over the past three years alone. Natural England’s Hen Harrier Recovery Project was established in 2002 to monitor hen harriers and work towards improving their numbers in England.

Although persecution is thought to be the main factor limiting hen harrier numbers in England, other factors including the suitability of local habitats and food availability are also significant in some areas.

Natural England is involved in a number of initiatives to help ensure hen harriers recover including through Defra’s hen harrier joint action plan.

“This is a very promising result for a pragmatic conservation project. Management options for bird of prey conservation rather than just legal enforcement is very forward thinking approach. The GWCT has studied the very real tension between harrier conservation and grouse shooting for over 30 years. Until this managed approach was adopted – at no small risk to the reputations of all involved – there was a damaging deadlock.

“If this trend can be maintained and hen harrier conservation status further improved, whilst supporting the red grouse management that best delivers our unique heather uplands, it will be a real breakthrough for practical, working conservation.”

“Yet again, it has been a fantastic year for hen harriers and we have now seen significant increases in successful nests and chick numbers for three years running as part of the hen harrier Recovery Plan which includes the innovative Brood Management Scheme trial.

“Twelve of the nests reported today are on land managed for grouse shooting and this reflects a genuine commitment from moor owners and managers to work with others and help rebuild the harrier population.”

Hen harriers lay 4-6 eggs during late April–May, with incubation lasting 30 days. Hen harrier chicks then fledge in 28-32 days. Both females and males attend the young, with the males providing food which is often passed mid-air to the female in a distinctive display of ‘throw and catch’.

A high proportion of this year’s chicks have been fitted with satellite tags, which will allow Natural England to monitor the progress of the birds as they move away from their nest areas.