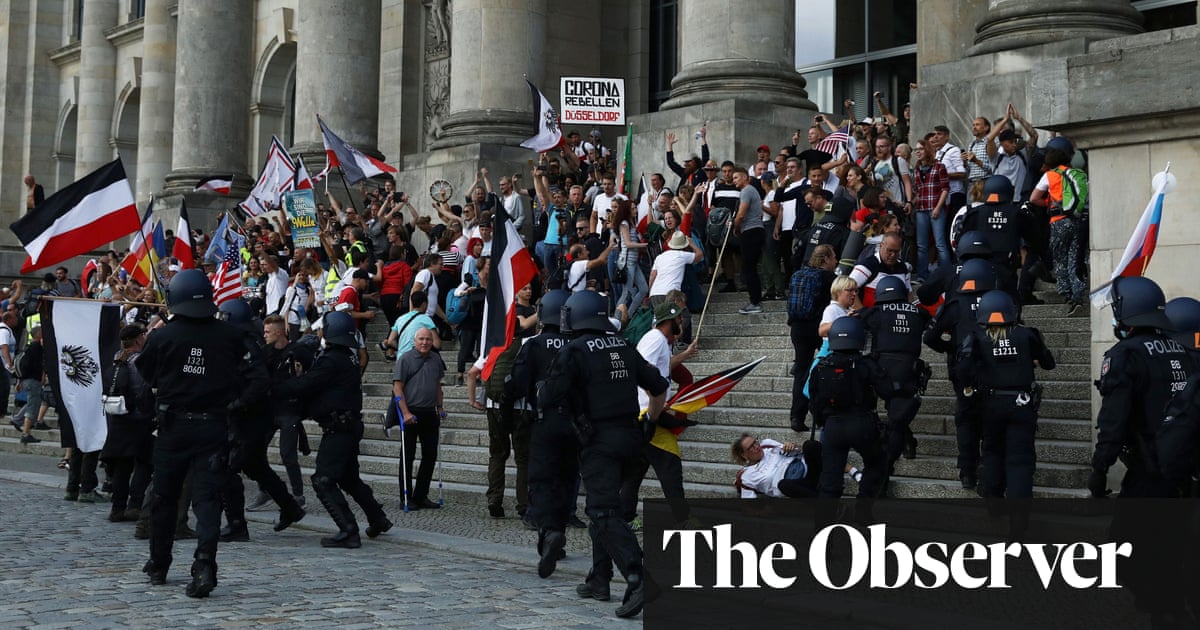 Far-right extremists tried to storm the German parliament building on Saturday following a protest against the country’s pandemic restrictions, but were intercepted by police and forcibly removed.

The incident occurred after a daylong demonstration by tens of thousands of people opposed to the wearing of masks and other government measures intended to stop the spread of the new coronavirus. Police ordered the protesters to disband halfway through their march around Berlin after participants refused to observe physical distancing rules, but a rally near the capital’s iconic Brandenburg Gate took place as planned.

Footage of the incident showed hundreds of people, some waving the flag of the German Reich of 1871-1918 and other far-right banners, running toward the Reichstag building and up the stairs.

Police confirmed on Twitter that several people had broken through a cordon in front of parliament and entered the staircase of the Reichstag building, but not the building itself. Force had to be used to push them back. Stones and bottles were also thrown, police said.

Germany’s top security official condemned the incident. “The Reichstag building is the workplace of our parliament and therefore the symbolic centre of our liberal democracy,” the interior minister, Horst Seehofer, said in a statement. “It’s unbearable that vandals and extremists should misuse it.” He called on authorities to show zero tolerance.

Earlier, thousands of far-right extremists had thrown bottles and stones at police outside the Russian embassy. Police detained about 300 people throughout the day.

Berlin’s regional government had tried to ban the protests, warning that extremists could use them as a platform and citing anti-mask rallies earlier this month where rules intended to stop the virus from being spread further were not respected.

Protest organisers successfully appealed against the decision on Friday, though a court ordered them to ensure physical distancing. Failure to enforce that measure prompted Berlin police to dissolve the march while it was still in progress.

During the march, which authorities said drew about 38,000 people, participants expressed their opposition to a wide range of issues, including vaccinations, face masks and the German government in general. Some wore T-shirts promoting the QAnon conspiracy theory, while others displayed white nationalist slogans and neo-Nazi insignia, though most participants denied having far-right views.

Uwe Bachmann, 57, said he had come from southwestern Germany to protest for free speech and his right not to wear a mask. “I respect those who are afraid of the virus,” he said, wearing a costume and a wig that tried to evoke stereotypical Native American attire. He suggested, without elaborating, that something else was behind the pandemic.

Another protester said he wanted Germany’s current political system abolished and a return to the constitution of 1871 on the grounds that the country’s postwar political system was illegal. Providing only his first name, Karl-Heinz, he said he had travelled with his sister from their home near the Dutch border to attend the protest and believed that the coronavirus cases being reported in Germany now were false positives.

Germany has seen an upswing in new cases in recent weeks. The country’s disease control agency reported on Saturday that Germany had recorded almost 1,500 new infections over the past day.

Germany has been praised for its handling of the pandemic, and the country’s death toll of some 9,300 people is less than a quarter of the amount of people who have died of Covid-19 in Britain. Opinion polls show overwhelming support for the prevention measures imposed by authorities, such as the requirement to wear masks on public transport, in stores and some public buildings such as libraries and schools.

Along the route were several smaller counter-protests where participants shouted slogans against the far-right’s presence at the anti-mask rally.

“I think there’s a line and if someone takes to the streets with neo-Nazis, then they’ve crossed that line,” said Verena, a counter-protester from Berlin who declined to provide her surname.

In London, hundreds of people crowded into Trafalgar Square for a Unite for Freedom protest against government lockdown restrictions and the wearing of face masks. The Metropolitan police warned demonstrators that anyone attending a gathering of more than 30 people may be at risk of committing a criminal offence.