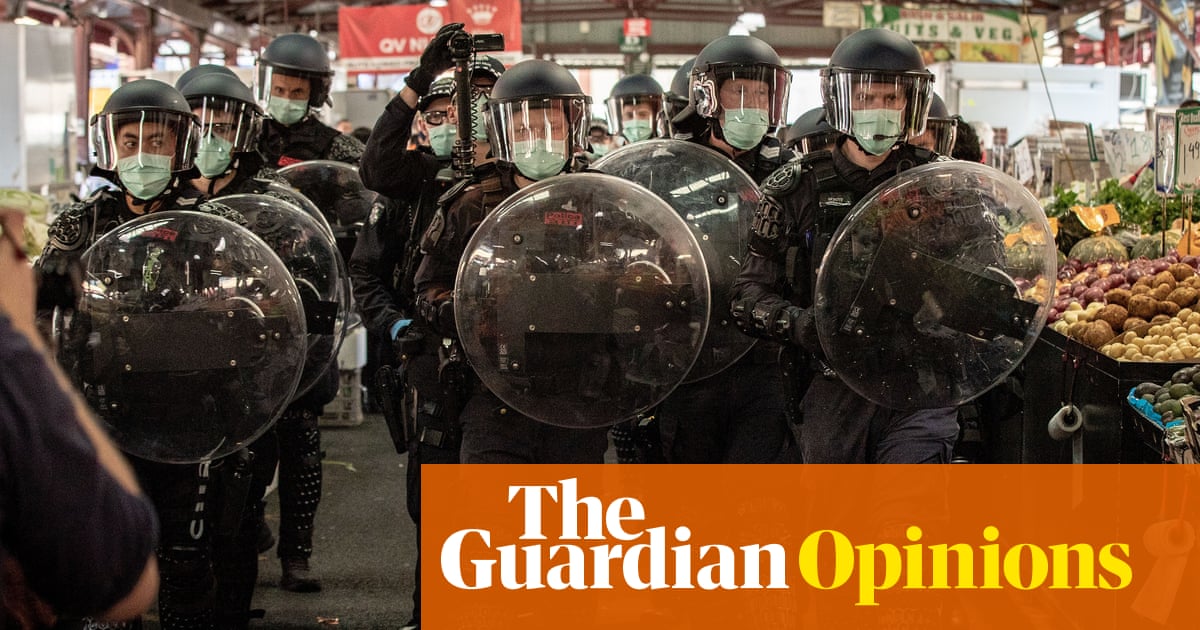 If the pandemic deeply disoriented the Australian right, it has also confused the left, particularly in relation to civil liberties.

“There is not a single era in United States history in which the police were not a force of violence against black people.”

BLM has now mobilised between 15 and 26 million people in the US, making it probably the biggest protest movement in American history. Its slogans reverberated in Australia, too, where local organisers called attention to the massive over-incarceration of Indigenous people and the persistence of black deaths in custody.

The resurgence of BLM after the killing of George Floyd coincided, of course, with the first wave of Covid-19, a pandemic that forced politicians from both parties to implement extraordinary rescue measures. As the economic devastation from the virus became clear, federal and state governments threw together Keynesian-style programs centred on social security and stimulus.

But that response also relied on state coercion, with police given extraordinary emergency powers in the name of preventing the spread.

Worried (correctly, as it turned out) that the poor and the marginalised would be most at risk from the virus, many progressives called for the anti-Covid shutdown to proceed more quickly and more thoroughly.

But what did that mean for civil liberties?

The issue first came to a head at the BLM rallies in June. Despite politicians, the media and the police warning people not to protest, the massive attendance at events at which all participants wore masks seemed, for a time, to settle the debate. The organisers argued to affirm the importance of black lives during a health emergency – and tens of thousands of marchers agreed with them.

Yet the return of Covid in Victoria changed everything.

Despite an oft-repeated slander blaming BLM for the second wave, the resurgence of the virus owed nothing to the protests. Nevertheless, the severity of the outbreak convinced many progressives of the necessity of draconian measures – especially as neoliberal ghouls joined forces with QAnon denialists to call for the re-opening of the economy, even if that meant letting coronavirus rip.

A strange and unhealthy polarisation developed, with conspiracists on the far right crying freedom, while #Istandwithdan lefties backed riot police barrelling through the Victoria Market to suppress demonstrations.

In these difficult conditions, progressives need to be able to walk and chew gum at the same time.

The Andrews government remains entirely correct to take action on Covid. Campaigns like “Give Dan the Boot” appeal primarily to fantasists who imagine the virus as a UN plot and to free market fanatics prepared to sacrifice public health for the sake of profit.

But that doesn’t mean the left should remain indifferent to, say, police using incitement charges to arrest people simply for posting on Facebook.

Let’s not forget that, even before the pandemic, civil liberties in Australia were at a low ebb.

Australians no longer possess the right to strike in any meaningful sense, with all manner of legislation hedging the circumstances in which industrial action might be legal. In June, the Morrison government introduced legislation allowing Asio to question 14-year-old children, while the Kafkaesque prosecution of Bernard Collaery shows the extraordinary lengths authorities will go to punish whistleblowers.

The defence of basic liberties matters in the midst of a pandemic in part because the precedents being set now will have implications long into the future.

In New South Wales, for instance, the relatively low numbers of infections means thousands can attend NRL matches while casinos and pubs continue to trade. Yet police have been using public health legislation to arrest student protesters, even as activists assiduously wear masks and remain in small, socially-distant groups.

The staggering job losses unfolding in higher education show why the ability to stand up for one’s rights matter, as we brace for the post-Covid economy.

But protesting also matters in terms of combating the conditions that gave rise to the pandemic in the first place.

In Victoria, for example, Covid has flourished in the sectors devastated by neoliberal reforms. The second wave washed over the state because the quarantine program depended on poorly trained, low wage security guards; the ravages of the virus in aged care institutions can be attributed to the precarity prevailing through that industry.

More generally, scientists tell us that, unless we end the war on nature, we face an ever increasing risk from new and deadly viruses unleashed by global warming and uncontrolled urbanisation. You only have to think of the repression heaped on Extinction Rebellion last year to understand the importance of basic rights in the fight to stop climate change and defend the environment.

None of this means that demonstrators should simply flout health regulations. Precisely because progressives take Covid seriously, we need to be more careful than anyone about preventing its spread. The organisers of rallies must adopt appropriate measures to protect participants and public – exactly as the BLM activists did back in June.

At the same time, a health emergency does not change fundamental principles. As Kaba argues, governments invariably police for tasks that would be far better performed by unarmed civilians.

If Covid has shown us anything, it’s that Australia need more doctors, more nurses and more scientists, not an intensified repression.