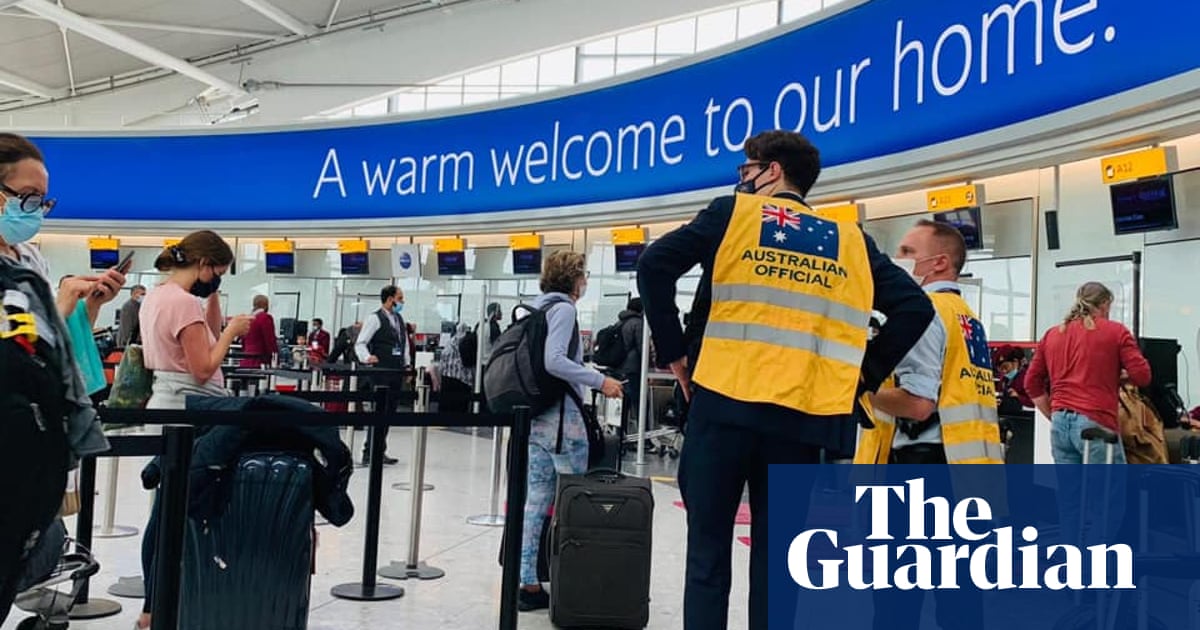 Teams of Australian diplomats are being deployed to Heathrow airport to help stranded Australians who have been forced to camp at the airport.

According to the Department of Foreign Affairs and Trade, there are now more than 25,000 Australians overseas who have registered an intention to return home, but who cannot access flights due to the government’s strict international arrival caps.

The caps, introduced in July then tightened shortly after to ease pressure on Australia’s mandatory hotel quarantine system, mean only 4,000 passengers can enter Australia each week, with some flights limited to carrying as few as 30 passengers.

Airlines frustrated at the caps have begun to publicly acknowledge they are cancelling the tickets of economy, and increasingly business class passengers, so they can use their limits for more expensive tickets and remain profitable under the caps.

While the caps apply to arrivals from all countries, the Australian high commission in the UK has been forced to take extra steps to deal with the impacts of the caps due to the higher number of Australians stuck in the country.

“Caps on international passenger flows have made it harder to head home, but we’re determined to ensure every available seat has an Australian in it,” the high commission tweeted on Tuesday.

In a Facebook post, it said the teams were meeting with passengers whose flights had been cancelled, and liaising with airlines, airports, and governments to find any unused seats.

“If you need the team, flag them down in Terminal 2 or Terminal 5,” the post said.

Last week, a Perth mother of three posted photos online showing her children, including a one-year-old, sleeping on their coats on the airport floor. She said they had slept there for three days, because their flights home – which she claimed were booked before the caps were introduced – had been cancelled.

The story follows scores of stranded Australians contacting Guardian Australia , including many who had travelled overseas in recent weeks with a valid exemption to visit a sick relative, who have had their return tickets cancelled, and now face an indefinite period away from their families, jobs and secure accommodation.

Some Australians have also staged a small protest outside the high commission in London, calling for the government to intervene.

This week the Board of Airline Representatives of Australia, which represents airlines including Qatar Airways, Singapore Airlines and Etihad, revealed that the 140 flights into Australia in the first week of September landed with 26,000 empty seats.

However, Barry Abrams, executive director of Bara, told Guardian Australia the figure of 25,000 stranded Australians who have registered overseas downplays the significance of the problem.

He said airline booking data of cancelled tickets indicates there are closer to 100,000 Australians stranded overseas.

“There’s a pressing need to understand how big this problem is right now,” Abrams said.

Abrams said that while the federal government – which implements caps for each city requested by state governments – has indicated some state premiers might take a few more flights to help repatriate citizens, a more drastic increase is needed, to allow at least 100 passengers per flight.

“It’s no good if one or two state governments create crumbs of capacity, if it’s only adding to the crumbs of our current national capacity.”

Last Friday, the prime minister, Scott Morrison, said Tasmania’s premier Peter Gutwein had indicated he “was keen to be part of” a commitment from states to increase arrival capacities, when the issue was discussed at national cabinet. Morrison has yet to outline details of how caps would be increased.

However, on Friday, Gutwein told Guardian Australia the state was not in a position to help repatriate Australians, because Hobart airport cannot take international flights. He said he was still expecting federal government support for infrastructure works to allow the airport to accept international flights.

Constitutional question: is it legal to limit how many Australian citizens can fly home each week?

The federal opposition this week renewed calls for the government to introduce federal quarantine solutions, pointing to specific facilities set up to repatriate Australians from Wuhan at the beginning of the pandemic.

Michael McCormack, the deputy prime minister whose portfolio has responsibility for the caps, said on QandA earlier this week that “nothing is off the table” as the government seeks a solution.

When Guardian Australia asked McCormack if it was considering federal quarantine facilities or extra resources to boost state quarantine capacities, a spokesman did not address the question specifically.

On Friday, Qatar Airways chief executive Akbar Al Baker defended prioritising the tickets of higher paying customers, telling ABC “we have no other alternative but to maximise the yield that we get”. He warned the caps were threatening the viability of flying to Australia.

The caps last until 24 October.