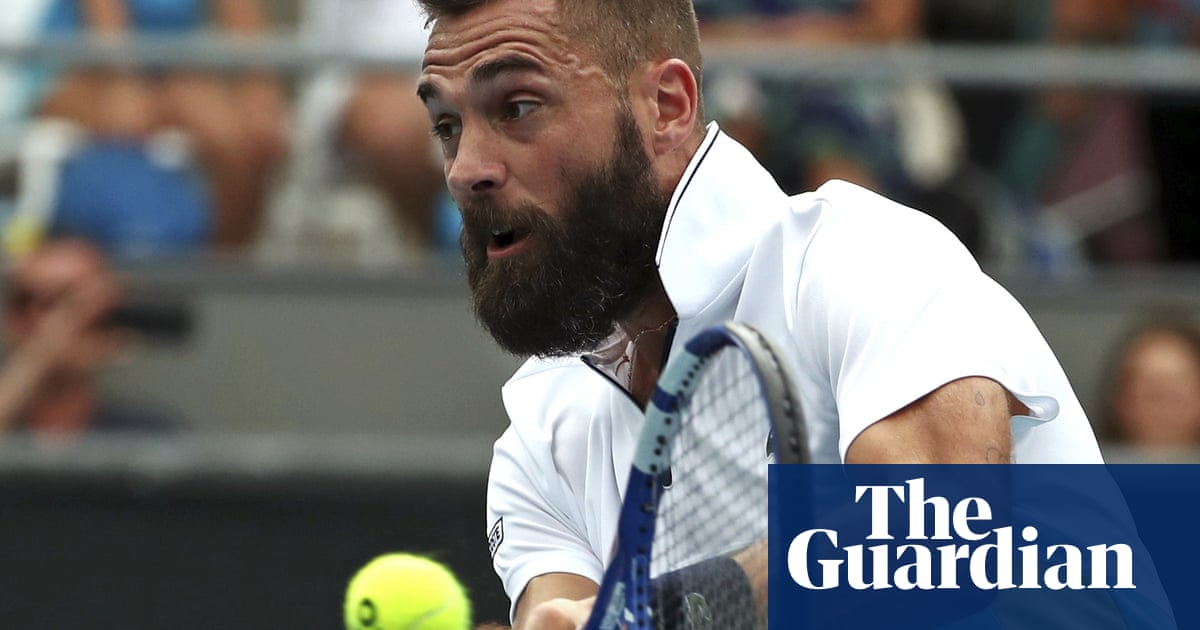 Benoît Paire, one of the game’s most entertaining and controversial players, has tested positive for Covid-19 on the eve of the US Open and been confined to his room in the players’ hotel, according to his compatriot Caroline Garcia and French media reports.

Johanna Konta, the British No 1 who opens her campaign against Heather Watson on Tuesday, confirmed she too had learned of Paire’s positive test.

If there has been a breach in the biosecure bubble the United States Tennis Association has spent several weeks setting up in two Long Island hotels a short bus ride from the event, the tournament, which starts at Flushing Meadows on Monday, will be faced with a potentially embarrassing security issue. That could undermine the confidence of some players, especially those from outside the US who had to be convinced that travelling to New York during a pandemic was not going to be a health threat.

Paire, who had been the 17th seed, was due to play Poland’s world No 108, Kamil Majchrzak, in the first round.

Garcia, who plays Italy’s Jasmine Paolini first up and could make a good run in the tournament, said: “I just heard the news. I haven’t talked to him about it but we know it was one of the risks if you test positive or if one of your team members tests positive. It’s one of the chances you’ll be out of the tournament. I think we all agreed that walking into the bubble it would be a possibility.

“Of course, it’s very disappointing. But [returning to] competition, it’s a little bit different. Anything can happen. It was one of the possibilities. But I am happy, I feel good. With a case like this coming out, you realise all the rules, if anything, were very strict. You realise maybe it was good for us in the end.”

The USTA did not initially name Paire but confirmed a player who was asymptomatic had tested positive and would have to isolate for 10 days. Testing and tracing has begun. The French sports paper L’Equipe said Paire had arrived in the New York bubble on 18 August and four days later retired in the first round of the Western & Southern Open during his match against Borna Coric with “stomach aches”.

The paper’s tennis writer, Quentin Moynet, tweeted: “All the tests he had taken [until then] had been negative. He was placed in isolation at the hotel with his coach, Morgan Bourbon. The question now arises [about] who has been in contact with Paire in the bubble.”

Commenting on the issue, Konta said: “I mean I just found out about five minutes ago. Obviously it’s like, ‘Oh wow, really?’. The issue we have is that it’s not a full bubble and there are still some people who are working for the tournament, who are coming in and out. So, it’s as safe as we can get in terms of how many people are here to run this operation. But it was always going to take us by surprise and be a bit shocking and worrisome if a player tested positive. Obviously we have had a few.

“It doesn’t really change what I am doing on a day-to-day basis. Myself and the rest of the team are doing the best that we can in terms of keeping distance and trying to get on with our day-to-day things.”

Meanwhile, on the eve of his return to grand slam tennis after nearly 18 months, Andy Murray says Naomi Osaka’s one-day boycott that rocked New York should inspire players to follow their conscience.

Murray’s last appearance in a major was losing against Roberto Bautista Agut in five sets on his old, injured hip in the first round of the 2019 Australian Open. Patched up after a second operation, he returns to the scene of his 2012 grand slam title breakthrough in the US Open on Tuesday (5pm BST) against the world No 48, Yoshihito Nishioka.

When Nishioka’s compatriot, Osaka, brought the Western & Southern Open to a halt with one tweet and restarted it with another last week, Murray, renowned as a champion of women’s rights, was full of admiration.

“On that day, other major sports were competing in the States at the time and they decided to postpone/boycott the matches,” he said on Sunday. “I asked questions about what the ATP and the WTA were going to be doing in response to those actions, and how we were going to respond. I was told discussions were under way.

“Naomi felt very passionately about it. While the discussions were happening, Naomi had decided she was not going to play the following day, and she put out her statement, which I fully supported. I thought it was fantastic. She’s done extremely well. The ATP and the WTA shortly afterwards issued their statements. The matches were going to be postponed, which I believe was the correct decision. I was happy they took that decision.

“I believe that individuals should have the right, as athletes, to do what we want, which I think is also the case in team sports. If a player doesn’t feel comfortable competing, not playing, he or she doesn’t have to do that. We have that choice. Naomi obviously felt extremely strongly about what happened. And I thought tennis did pretty well, to be honest.”