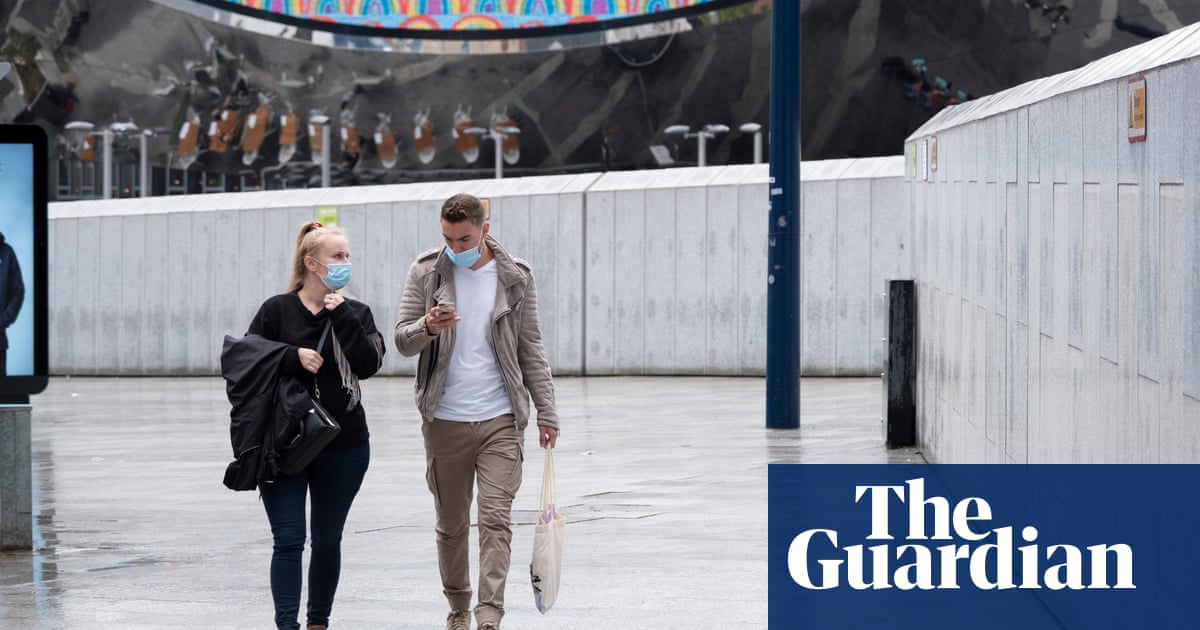 More than a million people in Birmingham will be advised to limit the number of people entering their homes to two as part of voluntary restrictions to stave off a local lockdown.

The UK’s second biggest city was placed on the government’s “watch list” on Friday as cases rose, prompting the council to suggest a series of voluntary measures which include limiting public gatherings to 30 people except for communal prayer and asking drivers and passengers in taxis to wear face coverings.

There will also be a pause on any areas of the Birmingham economy opening up which remain closed, such as nightclubs and conference centres.

Cases of Covid-19 are rising quickly in the city, with 30.2 cases per 100,000 and the percentage of people testing positive up to 4.3%. More than half of cases in the last week have been within the 18-34 age demographic.

The advice in Birmingham came as stricter measures to stop the spread of coronavirus in in Oldham and parts of Pendle and Blackburn in east Lancashire were further tightened, with residents told to avoid public transport except for “essential travel” and not to meet any other households in parks or at home as infection rates remained high.

Most of Greater Manchester and large swathes of east Lancashire and West Yorkshire remain subject to enhanced restrictions which ban gatherings in private homes or gardens. Three areas were released from the restrictions as cases remained low: Wigan, Rossendale and Darwen.

Birmingham council leader Ian Ward said the city’s addition to the watch list should be a “wake-up call for everyone” while West Midlands mayor Andy Street said “some people have not been strict enough” in their adherence to the measures already in place.

Police shut down 80 parties in Birmingham last weekend, according to the West Midlands deputy police and crime commissioner Waheed Saleem.

There have been small clusters of no more than six cases in workplaces across retail, hospitality and manufacturing, said Ward. Other infections have been recorded within households and social networks and in care homes, he added.

Ward said: “We do not have current plans for a lockdown in the city of Birmingham, nor to we have plans to restrict travel either in or out of the city. The kind of measures we are looking at is a halt on the opening up of further new sectors, restrictions on gatherings of more than 30 except for congregational prayer; advising that face coverings will be required for both drivers and passengers except where there is a clear clinical exception; and preventing the gathering of two households in future and limiting that to just two individuals visiting a household at any one time.”

He was due to suggest these measures to the health secretary, Matt Hancock, at a meeting on Friday afternoon.

Measures were stepped up in Oldham, parts of Pendle and Blackburn on Friday, three areas where cases remain stubbornly high. From midnight on Saturday, residents in these three areas should not socialise with anyone from outside their household.

Residents will be advised to avoid using public transport except for essential travel, and the numbers of people who can attend weddings, civil partnerships and funerals should be limited to household members and close family and no more than 20 people.

“The sharp rise in cases is in part due to a major increase in testing led by local councils, but as the percentage of people testing positive is also increasing, local data suggests the increase continues to be due to social mixing between younger age groups of 20- to 39-year-olds,” the DHSC said.

James Grundy, the MP for Leigh in Wigan, said Hancock had agreed to a “more nuanced, tailored approach to dealing with outbreaks”, He said the measures would be taken on a ward-by-ward basis, in consultation with local authorities and local MPs.

Enhanced restrictions banning gatherings in homes and gardens remain in place in the rest of Greater Manchester, as well as Leicester; Bradford, Calderdale and Kirklees in West Yorkshire; and Burnley, Hyndburn and Preston in Lancashire.

Northampton has been designated an “area of intervention” following an outbreak linked to the workforce at the Greencore factory, where nearly 300 workers have tested positive.

The factory will close voluntarily from Friday, and employees and their direct households will be required to isolate at home for two weeks.