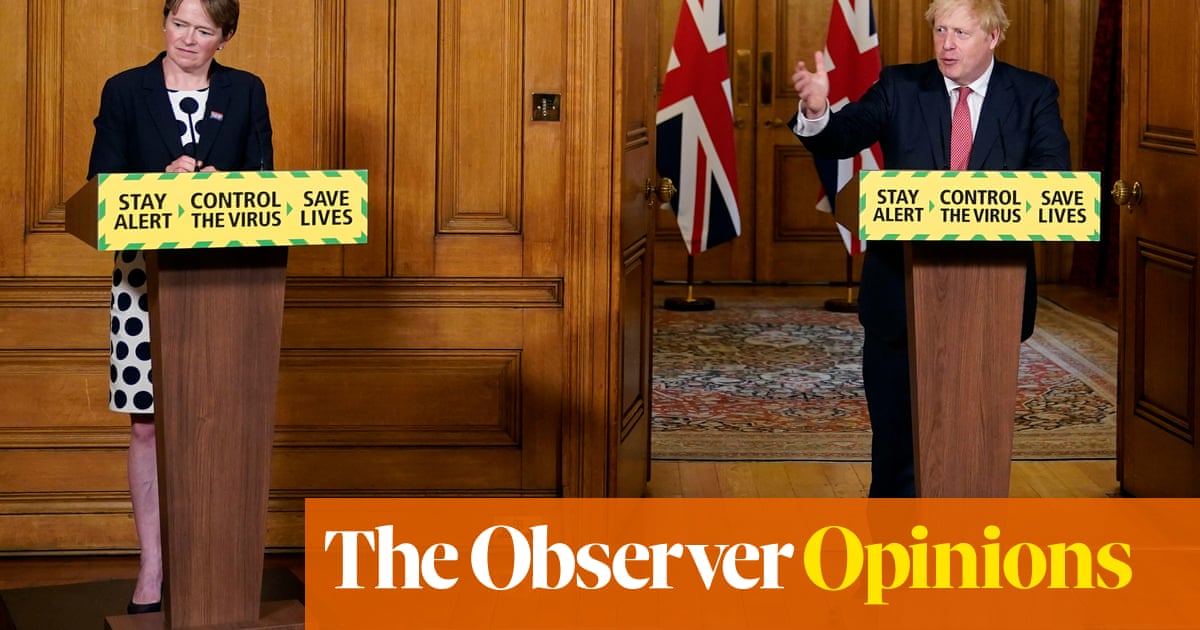 The radical right understands the cliche that every crisis is an opportunity. It takes genuine complaints and then, like a farmer diverting a stream to water his crops, turns them to suit its interests. The Conservatives are using the opportunity of the pandemic to stockpile power. Labour people believe they want to use the power to deregulate and update Thatcherism for the 21st century. Maybe they do. But there is a danger in over-intellectualising the lust for power. Often, power is its own justification and sought for its own sake.

To ask what ideological project Vladimir Putin is advancing when he orders the murder of his opponents is to miss the point of the poison his gangsters dispense. All there is to say is that Putin wants to make opposition to his rule in Russia so dangerous that only the bravest will dare stand against him.

Likewise, all there is to say about a prime minister 100 miles out of his depth and his cabinet of toadies is that they need to accumulate power for reasons of self-preservation as much as rightwing ideology. They need the power to get away with blaming others for their mistakes. They want to encourage obsequiousness by having the power to reward followers with jobs they could not hope to fill if promotion depended on merit.

Above all, our second-rate ruling class has a psychological need for the power to silence argument. They have developed an all-encompassing conspiracy theory that portrays accountability and rational criticism as plots by liberal elitists to undermine the government, rather than as the necessary checks of a robust democracy. Now, like spoilt children, they want the power to make the adults in the room too frightened of their tantrums to contradict them.

If I had predicted when Britain locked down and the corpses piled up that the government’s main concern by August would be abolishing the neutrality of the civil service, you would have thought me mad. Then, if I had predicted in 2008 that the reaction to the banking crisis would be the cutting of benefits and the closing of Sure Start centres and police stations, you would have doubted my sanity too.

The fatal failures of the British state raise a genuine complaint about a crisis that may be returning with renewed venom after its summer break. There is a palpable sense that we are a country that has been taken for fools. Britons who believed that our state and National Health Service would work as well as, if not better than, the governments of other developed countries have been taught one hell of a lesson.

Conservatives, however, cannot enact the necessary reforms. They cannot rebuild local government, whose public health officers ought to have been at the forefront of the fight against Covid, for that would mean reversing austerity and, as crucially in my view, giving up a part of the power Johnson monopolises at the centre. They ought to be reversing the privatisations, which have fragmented and enfeebled the British state. But that would mean abandoning Serco and other crony capitalist firms, which are their natural allies. They might have encouraged a freethinking culture in the bureaucracy. But although the prize hypocrite Dominic Cummings pretends he favours open, scientific debate, his treatment of Conservative MPs and the civil service shows a Putinesque intolerance of dissent.

Instead of reforming, the Johnson administration rigs and centralises. In the middle of a crisis, when public health officers should be preparing for the largest vaccination campaign ever attempted, the Conservatives are abolishing Public Health England and creating a new agency. For all its undoubted failings, Public Health England was not a rogue quango. It was wholly under the control of the Department of Health and the health secretary, Matt Hancock. In other words, its undoubted failings were his undoubted failings. The only difference being that, unfortunately, Hancock is not proposing to abolish himself.

In case you needed it spelling out, a worker at Public Health England explained why the government was throwing her agency into confusion when it was needed most. “By scapegoating PHE, the government both absolves itself of any blame and removes the need for any independent inquiry. Any future criticism does not need to be addressed as the matter has been dealt with.”

Just so, and after the back-covering comes the power accumulation. The gullibility with which journalists write about the Johnson administration can still astonish. The Atlantic, an American magazine, published a long account of the prime minister’s determination “to overturn the status quo and usher in a new political zeitgeist” that was so admired by “small c” conservatives here that the Times republished it. Nowhere did the Atlantic mention that the shiny new zeitgeist is the old Adam of cronyism dressed in modern clothes. Just as promotion to the cabinet depends on loyalty rather than talent, so civil servants, who at least have the capacity to tell hard truths to politicians, are replaced by placemen. Or in the case of the new National Institute for Health Protection, which is replacing Public Health England, a placewoman: the Conservative peer Dido Harding.

To say she is wholly unqualified for the job is to understate the case: she is positively disqualified. As chief executive of TalkTalk, she presided over the mass leak of its luckless consumers’ confidential data. In government, she headed the test-and-trace programme and presided over calamities that would be funny were not so much public money and, indeed, citizens’ lives blown away. Harding was in charge of the ludicrous “NHSX” app that most of us are still waiting to see arrive on our phones and presided over a centralised system of contact tracing that was so inefficient that many tracers spent their days watching Netflix.

• Nick Cohen is an Observer columnist