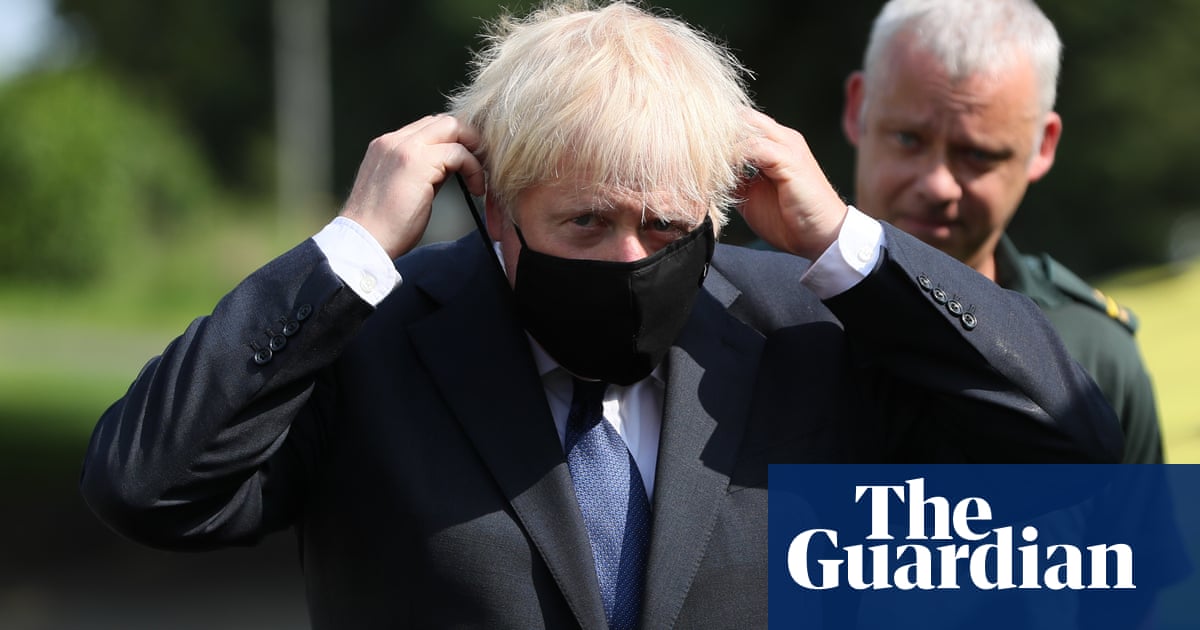 Pupils in England will no longer be advised against using face masks in secondary schools after Boris Johnson made an 11th-hour U-turn days before classrooms reopen.

In lockdown areas such as Greater Manchester, which have greater restrictions to stop the spread of the virus, wearing face coverings will become mandatory in school corridors where social distancing is more difficult.

‘I’m happy to be fined’: parents on the return to school

In areas of England not subject to tighter restrictions, headteachers will have discretion over whether to require face masks, but the government will no longer advise against their use, a senior government source said.

The prime minister bowed to pressure and changed the guidance late on Tuesday after scores of headteachers broke ranks to urge their use, backed by Labour and trade unions.

Johnson told reporters earlier in the day he would “look at the changing medical evidence as we go on” but insisted schools would be safe regardless.

The new guidance came after Scotland said secondary school pupils should wear masks in communal areas and on school buses, and days before millions of students are due to return to schools across England.

The change risks a major backlash from Conservative MPs, some of whom had publicly challenged him not to change tack for schools in England. One said the idea of pupils wearing masks in schools went “way too far” and many colleagues were angry.

The UK government has been under pressure to review its advice on masks in schools after the World Health Organization (WHO) updated its guidance at the weekend to say that face coverings were useful to curb the spread of Covid-19 where physical distancing between adults and pupils aged 12 and over was impossible, or in areas of high transmission.

Scotland confirmed on Tuesday that secondary schools would be given “obligatory” guidance on pupils wearing face coverings, while Stormont’s education minister said post-primary pupils in Northern Ireland would be asked to wear face coverings in corridors and other communal areas from 31 August when they return full time. Wales is reviewing its advice.

The business secretary, Alok Sharma, said on Tuesday morning that there was “no plan” to review guidance for England, but Johnson told reporters a few hours later that he would “look at the changing medical evidence as we go on”. Speaking on a visit to south-west England, the prime minister added: “If we need to change the advice then of course we will.”

The Department for Education (DfE) confirmed the change in updated guidance on Tuesday night, saying that as a result of the WHO findings “the government is revising its guidance on face coverings for staff and children in Year 7 or above in England”.

It added: “Nationwide, while the government is not recommending face coverings are necessary, schools will have the discretion to require face coverings in communal areas if they believe that is right in their particular circumstances.”

In areas where the virus is high, “defined as areas of national government intervention as listed on gov.uk”, adults and pupils should wear face coverings when moving around the school and in communal areas where social distancing is difficult. “It will not be necessary to wear face coverings in the classroom, where protective measures already mean the risks are lower, and where they can inhibit learning.”

A government source insisted schools were safe for pupils regardless of the U-turn, highlighting preparations the government has made and the lack of transmission when some pupils returned before the summer.

Kate Green, Labour’s shadow education secretary, said: “Parents and schools needed clarity and leadership, but instead the government have just passed the buck back to them.

“Face coverings should be compulsory in communal areas in schools. Instead of this half baked U-turn the government should have given clear guidance and a plan to deliver it.”

Geoff Barton, general secretary of the Association of School and College Leaders, which had urged the government to keep its advice under review, said the change was “inevitable”.

He said: “The new policy is discretionary, other than in places where coronavirus restrictions apply, and secondary school and college leaders will welcome the flexibility this affords them to decide what best suits their circumstances.

The mayor of London, Sadiq Khan, who had hinted he could unilaterally advise schools in the capital to adopt the wearing of face masks, criticised the Conservatives for appearing only to make the decision after pressure.

He tweeted: “It is of huge concern that yet again the PM has had to be forced into following the advice of public health officials.”

Backed by Labour and trade unions, hundreds of schools in England had said on Tuesday they were preparing to allow or encourage pupils to wear face coverings in communal areas in defiance of the existing advice.

But Huw Merriman, the Tory MP for Bexhill and Battle and chair of the transport select committee, said masks in schools would “further downgrade the learning environment. Like every other risk in our daily lives, we need to embed Covid and proportionately live with it.”

The Tory backbencher Marcus Fysh said: “Masks should be banned in schools. The country should be getting back to normal not pandering to this scientifically illiterate guff,” he said. “It is time to end the fear. And keep it away from our kids thank you very much.”

One of England’s biggest multi-academy chains, Oasis, which represents more than 28,000 pupils at 52 schools, said earlier on Tuesday it would defy the UK advice and ask older students to wear masks in communal places.

Steve Chalke, the founder of the Oasis Charitable Trust, said schools had a “moral responsibility” to make their environment as safe as possible.

The Academies Enterprise Trust, which represents more than 33,000 pupils at 58 schools, said staff and pupils could wear masks if they wished and the educational charity Ark, which has 27,000 children enrolled at 37 schools, said it would let teachers do so.

The previous DfE advice, first issued in July, said it did not recommend the use of face coverings in schools because pupils and staff were mixing in consistent groups and because misuse “may inadvertently increase the risk of transmission”. Wearing face masks in schools could cause “negative effects on communication and thus education”, it added.

The U-turn comes after an exams fiasco in which tens of thousands of teacher-recommended A-level results in England were downgraded, only to be reinstated days after the same reversal in Scotland.