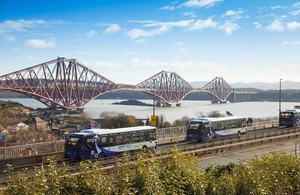 Fusion Processing is an SME based in Bristol’s Future Space. In its 8 years, its automotive products have gained over 1 million miles on the clock and it’s now leading a consortium developing Europe’s first full-sized autonomous bus.

A full programme of trials of Fusion’s CAVstar autonomous drive system installed on Alexander Dennis single-deckers will be taking place during 2020 and 2021. They will feature on a 30-mile route between Fife, across the Forth Road Bridge, to the Edinburgh Park Train and Tram interchange. A successful public demonstration was staged late last year.

CAVForth expects to be carrying passengers by this time next year, running at up to 50mph and more fuel-efficiently than manually driven buses. With services every 20 minutes between 6am and 9pm, there could be 10,000 passenger journeys per week. Five 42-seat buses are being fitted with Fusion Processing’s CAVstar® control and sensing system, integrated with each vehicle’s steering, throttle and braking systems. CAVstar® draws on information from radar, LIDAR, optical cameras and ultrasonic sensors, along with satellite navigation, to detect and avoid objects in all weathers, day and night.

The buses will operate at AV Level 4 autonomy, meaning that the vehicles will operate autonomously along the routes and, whilst there will be regular driver controls, the driver will not be expected to use them, other than in an emergency. As a further level of safety, the vehicles will have additional backup braking and steering systems which, in the highly unlikely event of a failure, the backup systems can be utilised by the CAVstar system without the ‘safety driver’ needing to intervene.

It follows a live trial of the CAVstar system commissioned by Stagecoach early last year. A bus specially adapted by Fusion Processing navigated its way autonomously around the group’s Manchester depot, visiting a fuelling station and the bus wash before finding its parking spot.