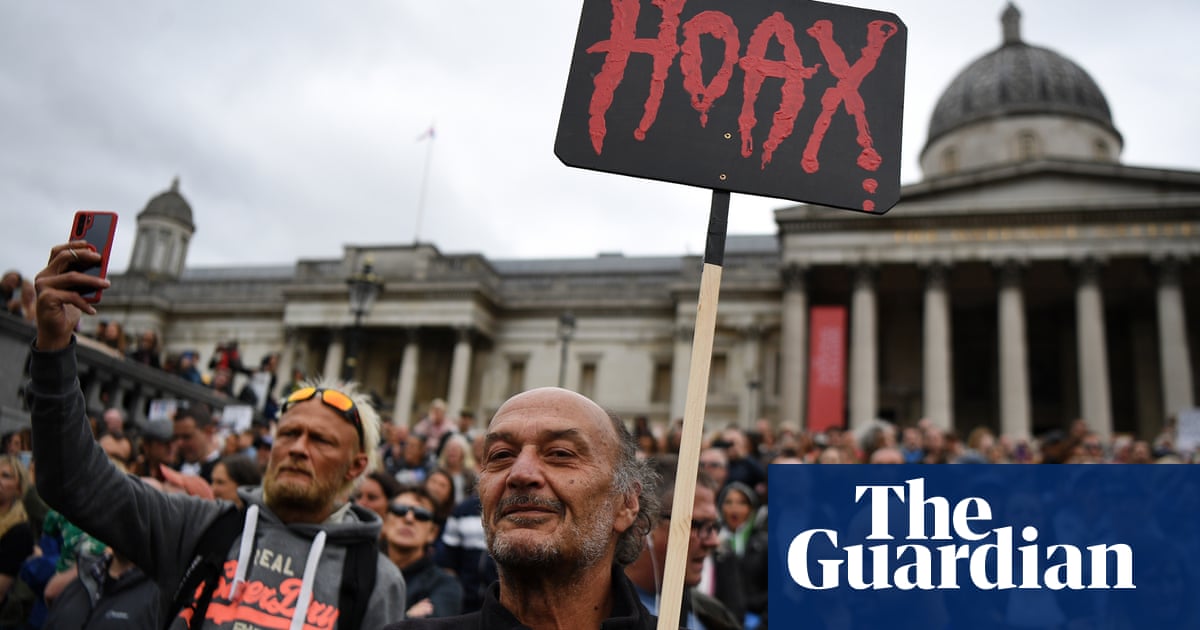 Thousands of protesters from across the UK gathered in London’s Trafalgar Square on Saturday afternoon to protest against coronavirus restrictions and reject mass vaccinations.

The event, which began at noon, drew a broad coalition including coronavirus sceptics, 5G conspiracy theorists and so-called “anti-vaxxers”.

Carrying placards railing against the World Health Organization, Bill Gates and the government restrictions to reduce the spread of coronavirus, the demonstrators called for an end to movement restrictions and mandatory face coverings. Many placards described the coronavirus pandemic as a “hoax” or “scam”.

A PA system set up in front of Nelson’s Column broadcast speeches by a number of speakers, who denied the reality and severity of the pandemic and accused the government of attempting to curtail civil liberties.

Among those due to speak were Piers Corbyn, the weather forecaster and older brother of the former Labour leader Jeremy Corbyn, the former newspaper columnist and health journalist Dr Vernon Coleman, and the conspiracist celebrity David Icke.

Although the demonstration focused on coronavirus restrictions, those taking part espoused anti-authoritarian grievances ranging from the lockdown to the imprisonment of Julian Assange to claims of elite child sexual abuse.

On the eve of the protest, Corbyn told the Guardian that a number of groups had come together to join in with the demonstration.

“In terms of whether you believe that the virus is a hoax or not, whatever is happening now is less than or equal to a normal flu, so the lockdowns and all that goes with them is unjustifiable in any terms,” he said.

“We are calling for MPs to refuse renewal of the Covid Act [Coronavirus Act], and if they do not, we will campaign to have them removed from office.”

Among those demonstrating on Saturday was 34-year-old Amina, who declined to give her surname. She carried a placard that said on one side, “Let food be thy medicine” and on the other, “Health doesn’t come from the tip of a needle.”

Of the food message on her placard, she said: “This is what we need to do. It’s worked for our ancestors, it’s worked for a lot of people around the world – and still is.”

Amina said she did not trust vaccines, and shared a number of examples of vaccines used in the developing world that she said caused widespread damage. “If you want to profit off the back of my health, then it’s not my health that’s important to you,” she said.

Elisha Edwardes, 36, said she was at the protest “to support the movement for freedom”. “The more I’ve been educated, the less fearful I am,” she said. “If anything I feel more in control. I’m here to create awareness and I feel that the mass majority of people have been deceived. And I think it’s easier to deceive people than convince them they’ve been deceived.

“A lot of the scenarios we’re seeing now don’t make sense and people are not questioning it. The lockdown has affected more people than the virus itself.”

The demonstration mirrored an event in Berlin on Saturday, which drew 18,000 coronavirus sceptics before being dispersed by police in the early afternoon.

Before it began on Saturday morning, the protest in the German capital had been the source of much legal and political contestation.

Berlin city authorities previously decided to ban the demonstrations out of fear that the protesters would not maintain social distancing or comply with face mask requirements, a move that sparked outrage amongst organisers and supporters. Berlin’s administrative court overturned the ban on the eve of the demonstration.

“Police officers are with a group of protesters at Whitehall,” the Met wrote on Twitter. “We have already provided the group with a letter explaining they are at risk of committing a criminal offence. We are now asking the group to disperse.”