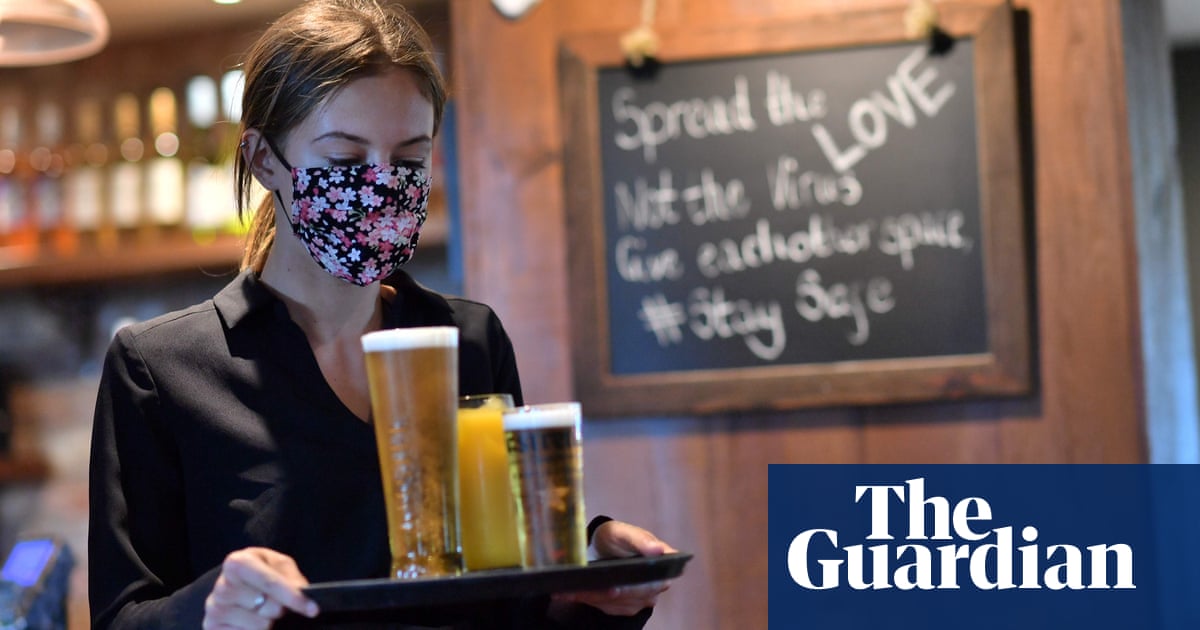 Pubs and bars have told Boris Johnson that plans to impose a 10pm curfew on drinkers are not supported by evidence and could devastate a sector “already on its knees”.

With measures to curb a second wave of coronavirus infections in England due to be announced on Tuesday, more than 175 publicans signed an open letter to the prime minister predicting that a curfew – or stronger measures such as a second national lockdown – would be disastrous.

Leading hospitality industry figures also dismissed the view that pubs, bars and restaurants were a significant cause of coronavirus infections.

“If Boris and his discredited advisers try to impose a lockdown, in my opinion, they’re toast,” he said.

Kate Nicholls, the chief executive of UK Hospitality, the trade body that represents restaurants, licensed premises and hotels, called on the government to take heed of its own statistics and avoid targeting the industry.

Public Health England figures for the week to 13 September suggested that of 729 reported outbreaks of Covid-19 – incidents resulting in at least one positive test – 45% occurred in care homes, 21% in education settings, 18% in the workplace and 5% in food outlets, including restaurants and pubs.

Nicholls said: “Hospitality businesses have patently not been a significant vector of the disease as the government’s own figures show and if lockdowns or further restrictions such as curfews are needed, they need to be highly targeted at the main issue – people moving in groups between each other’s homes and blatant breaches of the rules.

“Any restrictions that impact a sector which is already on its knees and that has shown itself to be the home of responsible and safe socialising must be targeted carefully, and come with full government support, to minimise the otherwise seismic and inevitable damage to business.”

Pubs, bars, nightclubs and restaurants have repeatedly warned that they face potential financial oblivion if new measures are introduced without the offer of further financial support.

In the letter to Johnson, which was coordinated by the Campaign for Pubs, the publicans said: “The reality is that any decision to impose further restrictions on pubs threatens the livelihoods of thousands of people.

“It risks the failure of many pub businesses and the permanent closure of thousands of pubs, irrevocably changing the face of this country, its villages, towns and cities.

“A key part of our culture, and an institution that is known and loved all round the world, namely the great British pub, is now under grave threat.”

Emma McClarkin, the chief executive of the British Beer & Pubs Association, called on the government to extend further support to the sector.

“It is vital that the government recognises the unprecedented challenges that pubs and brewers are facing at this time,” she said.

“We are calling on them to immediately put in place a sector-specific furlough scheme beyond October, extend the VAT cut and business rates holiday, and make a substantial cut to the punitively high rate of beer duty in the autumn budget.”

McClarkin added: “As an industry we recognise the need to continue to support the government and local communities to manage the risk of rising infection rates. Pubs have been adapting to the ‘new normal’ over the past few months and will continue to do so, but pubs were struggling to break even before today and these latest restrictions may push some to breaking point.”