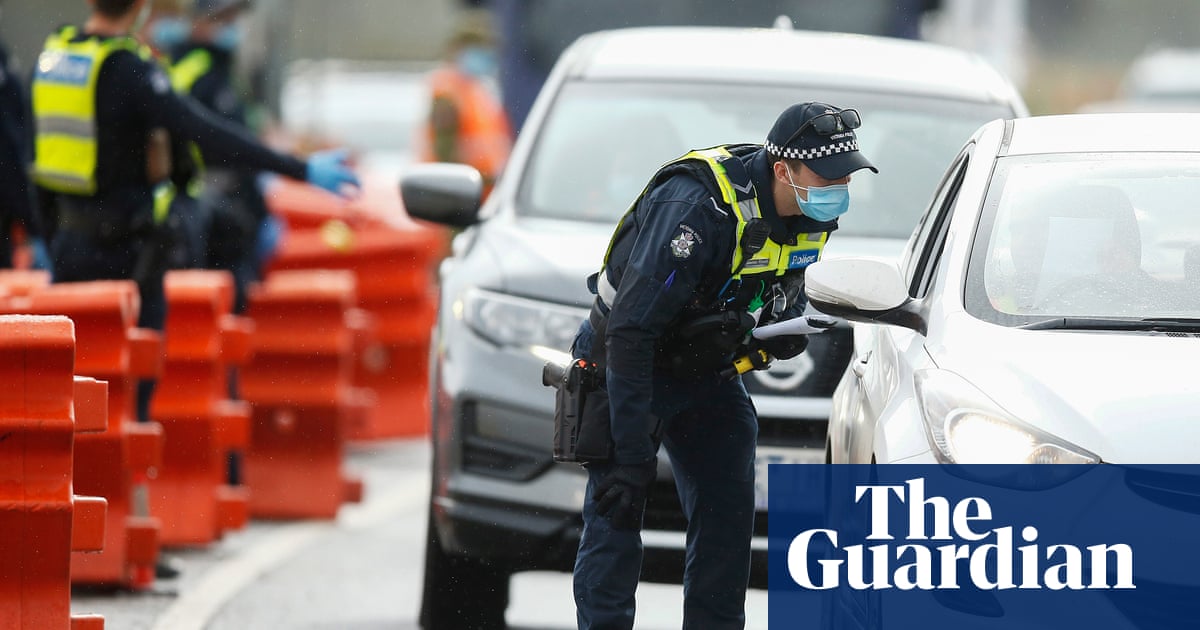 Victorian premier Daniel Andrews has issued a stern warning to Melburnians not to travel to regional Victoria, saying the “odds are very poor” for city dwellers thinking of escaping the city’s “ring of steel” .

The state will be effectively divided from Thursday, as regional Victoria gradually reopens from Covid-19 restrictions, while Melbourne remains in a tight lockdown.

“Anyone who thinks they might take a punt on heading to regional Victoria and not get caught, I think your odds are very poor,” the premier said.

The warning comes as Victoria recorded 28 new Covid-19 cases overnight, along with eight deaths, six of those linked to aged care, Andrews said. The last time new case numbers were in the 20s was on 24 June.

The state government also announced $26.7m in additional funding for early childhood services, which are set to reopen on 5 October.

Sessional kindergarten will be kept free for most families in term four, while primary aged students in regional Victoria will be able to return to school ahead of schedule, the deputy premier and education minister James Merlino said.

He said $500 per child would be provided to school- and local government-provided kindergartens, and government funding for cleaning would continue throughout term four.

Primary school students in regional Victoria can begin a staged return to school at the start of term four on Monday 5 October, with their return previously flagged for 12 October. Low cases numbers in regional Victoria and public health advice had prompted the government to change the return date, Merlino said.

Individual schools “will make a decision about whether they have their preps on the Monday or the grade six on the Monday, but the transition will happen in that first week”, Merlino said.

Meanwhile, the acting chief health officer Professor Allen Cheng said the local government area of Casey, in Melbourne’s south-east, was still a cause of concern. Five of the newly identified cases were located in the area, linked to household clusters and workplaces, Cheng said. Of the overall cases identified in the past 24 hours in Victoria, the source of 16 was still under investigation and had not yet been linked to known outbreaks.

“They are under investigation at this stage, though some will turn out to be mystery cases … The number of mystery cases has been dropping so we do eventually find out where most of these people [acquired the virus],” Cheng said.

From Thursday, pubs, caravan parks and hair salons began to reopen in regional Victoria, and people living in regional areas were no longer restricted in leaving their homes.

“The police are not mucking about,” Andrews said. “If you are from Melbourne and you are in regional Victoria and did not have an appropriate excuse, you will be fined.”

The premier’s warning comes a day after the government announced a heavy fine of $4,957 for any individuals attempting to cross the “ring of steel” dividing metropolitan Melbourne and regional Victoria.

The government is persisting with fines as a deterrence, despite Victoria suffering the pains of the current pandemic-induced recession and concerns fines are disproportionately enforced on migrant communities.

Victoria’s police-heavy approach also comes amid a string of controversies surrounding police conduct in enforcing the lockdown, including an alleged “violent assault” of an Indigenous man who was left with a broken arm after police spear-tackled him off his bike as he rode to work.

Asked what he thought of comments from Scott Morrison on Thursday that he would like to see Melbourne reopen, Andrews replied: “I have a good relationship with the prime minister.

“He understands fully the details of the roadmap. No doubt he’s pleased as I am, to think that in less than six weeks we’ve gone from 728 cases a day to 20 cases a day.”

Meanwhile in New South Wales, five new coronavirus cases were detected in the 24 hours to 8pm Wednesday night. Two of those cases were in returned overseas travellers in hotel quarantine, two were locally acquired and linked to a known case or cluster, and one was locally acquired with the source still under investigation.

Another new case attended the Eastern Suburbs Legion Club, bringing that cluster to nine cases. The case still under investigation is from the Murrumbidgee local health district.

“While a subsequent test on the person has produced a negative result, NSW Health is taking a cautious approach and asking the individual and close contacts to remain in isolation, while further testing is undertaken,” the NSW health department said in a statement on Thursday.

Anyone who attended the Five Stars Thaitanic restaurant in Casula on Saturday 12 September from 4.20pm to 5.20pm is considered a casual contact and must monitor for symptoms and get tested immediately if they develop, the department said.