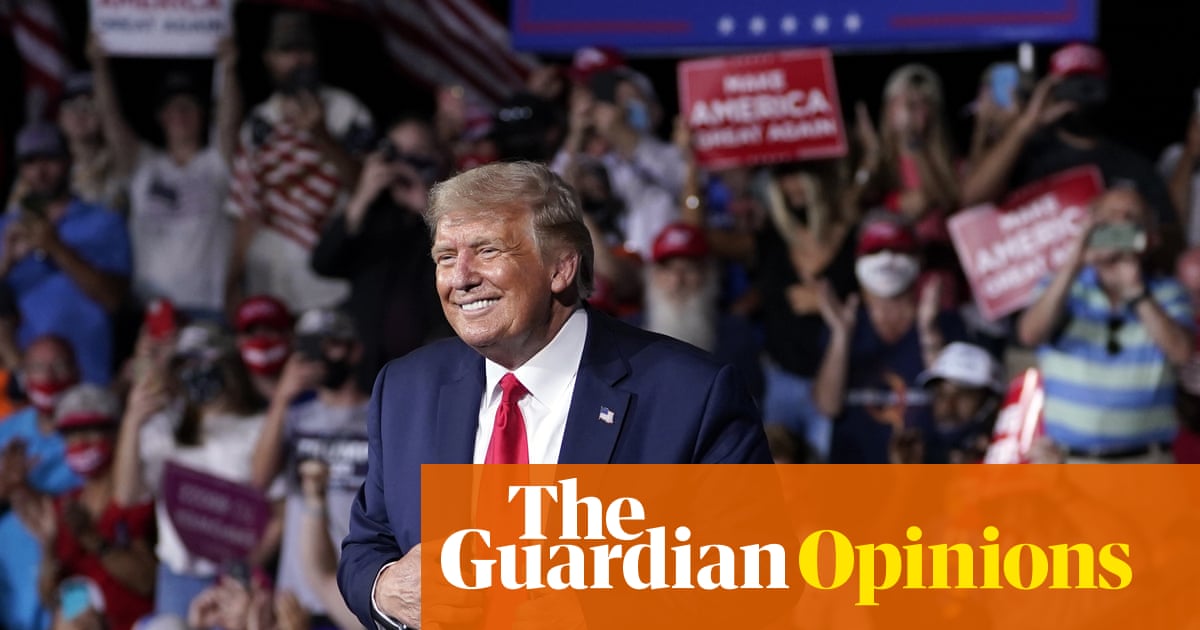 This year has already been one of the strangest and most unpredictable election years in living memory. The president faced an impeachment trial. A deadly disease has swept the land, devastating the economy. A supreme court seat opened up and is on course to be filled just days before the election. Hovering over it all is a president who refuses to promise that he will accept the outcome of the election. The traditional “October surprise” was going to have to be huge to get noticed amid all of this.

But, being 2020, this year didn’t fail to deliver. Donald Trump has tested positive for the coronavirus. To be sure, this might not strictly qualify as a “surprise” – given the president’s insistence on ignoring even the most basic of precautions against the virus, this development feels as if it was almost inevitable. But now that it has happened, it injects a huge degree of uncertainty not just into the race between Trump and challenger Joe Biden, but also into the stability and safety of the country in the coming weeks.

The effect on the campaign depends on the course of the president’s illness, and who else becomes infected. Both Biden and the vice-president, Mike Pence, tested negative today, but that doesn’t mean they’re yet in the clear. Trump himself – who is reportedly experiencing only “mild” symptoms as of Friday night – has been hospitalised at the Walter Reed national military medical center and is receiving experimental drug treatment. There, he might recover quickly, or he might become severely ill. Dangerous symptoms typically develop after a week, and we don’t yet know when Trump was infected.

If Trump does become seriously ill, the country will be in uncharted territory. Not since Teddy Roosevelt was shot in 1912 has a candidate entered the final stretch of campaigning while suffering a debilitating ailment. However ill he gets, Trump is likely to insist on remaining on the ballot.

Whether he develops a severe case or not, Trump’s diagnosis is unlikely to change the state of the race. Trump might emerge unscathed and attempt to hold up his own experience as evidence that the virus was never that bad after all. But coronavirus is not some abstract issue that Americans learn about only through the media. Nothing the president experiences or says will bring dead relatives back to life or give someone back a job they lost.

If Trump falls seriously ill, we can expect voices to be raised on the right in favor of delaying or invalidating the election. A delay would need the approval of Congress, and is almost impossible to imagine. Easier to imagine is that Trump’s illness could be used to further a narrative that the election has been illegitimately stolen from him. Much of the rightwing media is already promoting a conspiracy theory about mail-in ballots, and as a result a large segment of the country is poised to reject the result if Trump loses. If the president is unable to campaign for a while, he will have another excuse to urge his supporters to question the validity of the result.

The risks for the country are not just electoral. The presidency is an office with grave responsibilities and awesome powers. Trump has never embraced the serious side of the job, and much of the government has been forced into autopilot, lacking presidential guidance. But that doesn’t mean that Trump can’t give consequential and dangerous orders if he chooses. He commands a nuclear arsenal aimed abroad and a repressive apparatus which he seems to enjoy aiming at home.

Coronavirus patients persistently report suffering from brain fog, confusion and difficulty focusing on routine tasks. Any president would hesitate to admit they weren’t up to the job this close to an election, and Trump is far too much of a narcissist to ever do so. That means all of his power will remain in hands which may become even more unstable than usual. Knowing 2020, the real October surprise might be still to come, and we have no idea if the president will be in a fit state to respond to it. Given the president’s narcissism, disregard for science and addiction to lying, we probably won’t know until it’s too late.

The carelessness that led Trump to place the country in this situation is just another manifestation of the carelessness with which he has approached every aspect of his job as leader of the nation. He has done incalculable damage, and we should not lose sight of that just because the latest casualty of the Trump era is Trump himself. America, and not just the president, desperately needs to recuperate. For that reason, we should wish the president a speedy recovery, a devastating election defeat and a long and ignominious retirement. Only then can the real healing begin.