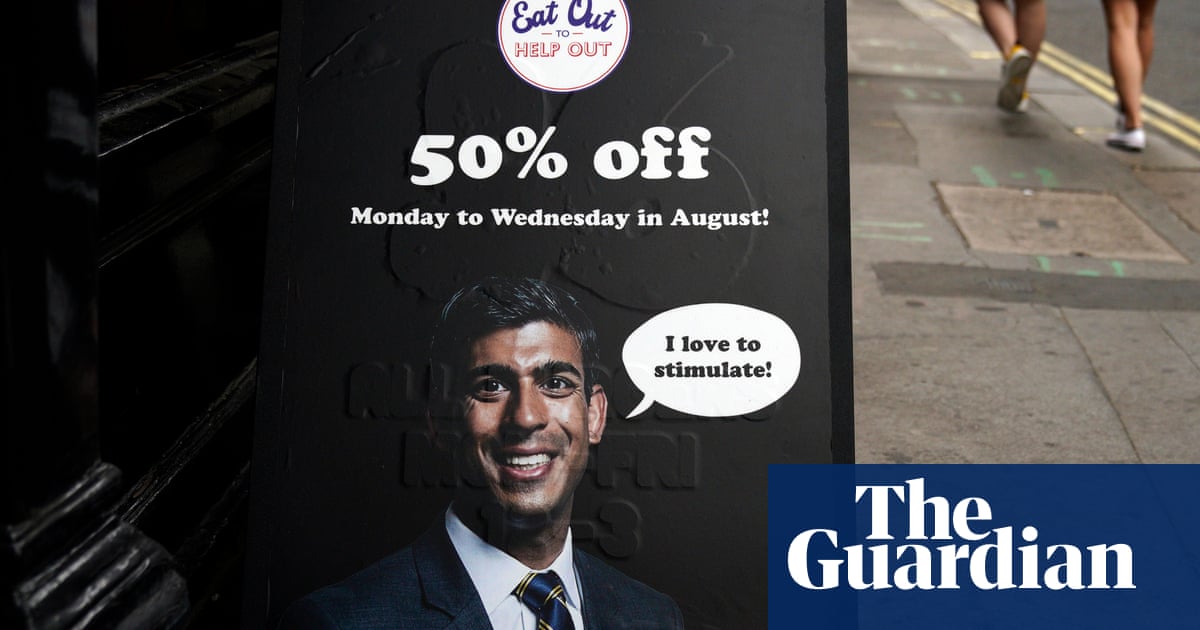 At least 100m subsidised meals were eaten by diners in the UK in August following a last-minute rush by the public to take advantage of the government’s month-long “eat out to help out” scheme, the Treasury stated.

The chancellor, Rishi Sunak, praised the public for helping to save jobs in the vulnerable hospitality industry as it emerged that the meal discount scheme had exceeded expectations and would cost more than the £500m he set aside in the July mini budget.

Official figures showed that the offer of 50% off the price of a meal up to a maximum of £10 per head on Mondays to Wednesdays had grown in popularity steadily throughout August. During the last week of the scheme the number of meals claimed rose from 65m to more than 100m.

On 31 August, a bank holiday in England and Wales, restaurant reservations, according to the online booking provider Open Table, were 216% up on the same day a year earlier.

The Treasury said 84,700 establishments had signed up to the scheme and had so far made 130,000 claims worth £522m. It added that the final total was certain to rise because businesses had until the end of September to claim reimbursements for their discounted meals.

Sunak announced the scheme in the hope of boosting custom in the hospitality sector, which employs 1.8 million people and was particularly hard hit by the lockdown and social distancing rules.

He said: “From the get-go our mission has been to protect jobs, and to do this we needed to be creative, brave and try things that no government has ever done before. Today’s figures continue to show ‘eat out to help out’ has been a success. I want to thank everyone, from restaurant owners to waiters, chefs and diners, for embracing it and helping drive our economic recovery.”

Quoting Open Table data, the Treasury said restaurant bookings had increased by an average of 53% on Mondays, Tuesdays and Wednesdays throughout all of August, compared with the same days in 2019.

In July 2020, restaurant bookings had been 54% lower on average, from Mondays to Wednesdays, compared with July 2019.

There was tentative evidence, the Treasury added, that the scheme was continuing to boost demand, with online bookings 2% higher on 1 September than had been the case on the equivalent day a year earlier. Some restaurants said they would continue to give the £10 discount.

A country-by-country breakdown of the UK showed that up to 27 August there were 51m meals claimed in England, 6m in Scotland, and more than 2m in both Wales and Northern Ireland.

Kate Nicholls, chief executive, of UKHospitality, the trade body for the sector, said the Treasury scheme had been a great success.

She said: “Our members have reported very strong bookings throughout August at a time when the sector really needed a boost. It has helped provide a lift in consumer confidence which is going to be key for hospitality businesses as they look to reopen and help rebuild the economy. The scheme has provided a timely boost in trade which will have helped many businesses safeguard jobs all around the UK.”