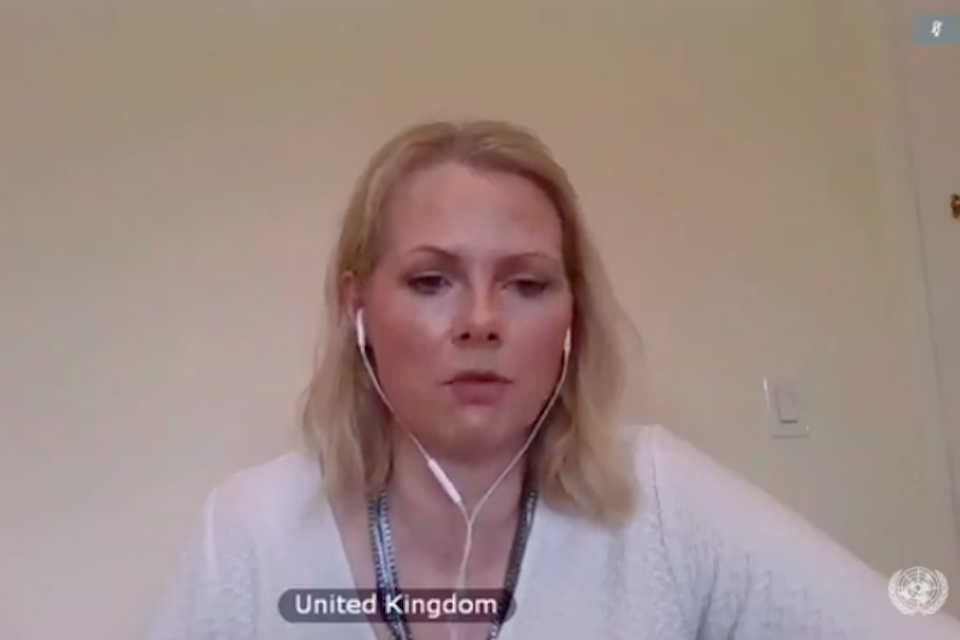 Thank you, Mr President, and thank you to Special Envoy Pedersen for his briefing.

I would like to start by once again mourning the loss of life due to the tragic events in Lebanon on the 4th of August, which sadly included a large number of Syrian refugees and, as we have just heard, Deputy Special Envoy Matar. I would like to join others in wishing her a speedy recovery. All of this is a reminder of the magnitude of the Beirut tragedy, but also of how generous Lebanon has been in responding to the crisis in neighbouring Syria.

We are deeply concerned by the escalating Covid-19 situation in Syria. There are now over 1,650 confirmed cases, with cases in regime-held areas more than doubling in the first 10 days of August and those in northeast Syria growing rapidly. We understand the actual number of cases to be far greater. This Council has feared a dramatic rise in cases in Syria, and it appears that this may well have now begun. It remains incumbent on us all to ensure that the necessary medical and humanitarian assistance reaches all of those in need.

We are also deeply concerned by the fragile nature of the ceasefire in northwest Syria, particularly in the context of an increase in Covid-19 cases. We strongly supported the ceasefire, agreed by the Presidents of Russia and Turkey on the 5th of March, and welcomed the fact that it appeared to have been broadly holding. This granted millions of Syrians in Idlib some respite and allow hundreds of thousands to return to their homes. We are therefore concerned at the apparent erosion of the ceasefire in recent weeks – in particular, an uptick in appalling attacks by extremist groups, notably on joint Russian-Turkish patrols, as well as repeated airstrikes by Russian and regime forces.

As I said last month, we know what the humanitarian impact of a breakdown in the ceasefire would be: the 7th of July Commission of Inquiry report found evidence of widespread, indiscriminate attacks by regime and pro-regime forces on civilians, hospitals and schools with reasonable grounds to believe that war crimes had been committed by the regime and Hayat Tahrir Al-Sham. The UK therefore calls for immediate and sustained cessation of hostilities by all parties in line with requests by the UN Secretary-General and the UN Special Envoy. Neither Syria nor the region can cope with another entirely unnecessary humanitarian disaster on top of a significant Covid-19 outbreak.

This Council is meeting just before the resumption of Constitutional Committee talks in Geneva. It is vital that all parties engage genuinely and properly with this process and that they refrain from re-imposing unnecessary conditions like those pushed in November. The representatives of the regime and opposition and independent figures meeting in Geneva need to make progress on the real issues facing the country. All parties need to be driven by the urgency of the appalling situation in Syria. Ordinary Syrians, whether they are struggling at home or living difficult lives as refugees, don’t have weeks, months or years to waste. They want the war to end and a negotiated political solution which enables reconciliation and reconstruction of the country.

We must also remember that the Constitutional Committee is just one part of the wider political process set out in Security Council Resolution 2254. Progress on the Constitutional Committee must be accompanied by immediate action on other issues, such as the widespread release of political prisoners and vulnerable people; making medical care available for those in detention; and making progress in building the conditions for the safe and voluntary return of refugees and internally displaced persons. Now is the time to seize this opportunity.

We would also like to take this opportunity to remind all actors of the importance of ensuring the meaningful participation of women in the UN-facilitated political process for Syria, as the Security Council made clear in resolution 2254.

Finally, I would like to say a word on sanctions. Our sanctions are targeted and impose asset freezes and travel bans against specific individuals and asset freezes on specific entities. Those targeted are responsible for human rights abuses against ordinary Syrians, such as repression, arbitrary detention and violence against demonstrators, and who support or benefit from the Assad regime, including enriching themselves through luxury housing complexes built on land appropriated from Syrians who have fled, been arrested or killed. A separate EU sanctions regime targets those involved in the proliferation of chemical weapons. In addition, we apply some trade and sectoral restrictions designed to restrain the Assad regime’s ability to fund and wage war against its own people, including through the use of chemical and biological weapons.

These sanctions do not apply to food, medicine, medical equipment or medical assistance. Humanitarian exemptions apply to other equipment where this is needed, further mitigating the impact of sanctions on humanitarian programmes. We will continue to work with organisations and individuals to ensure that measures do not affect humanitarian operations in Syria and that organisations and individuals are able to import non-conflict-related goods.

It is not the case that our opposition to sanctions language in the recent cross-border resolution is evidence that sanctions are a problem. As we have said repeatedly, our sanctions on the Syrian regime have wide humanitarian exemptions. The reason we objected to this language in the cross-border resolution is because we do not accept any false equivalence between the disastrous effects of regime policies and Chinese and Russian refusal to allow more than one cross-border crossing on the humanitarian situation in Syria, with our targeted sanctions regime.

The reason why the Syrian people lack the humanitarian and medical aid they need is not because of our sanctions or because of any lack of generosity on the part of the UK and other international donors. It is, I am sad to say, because of the deliberate policies by the Syrian regime and its supporters to perpetuate the conflict rather than seek reconciliation; to limit humanitarian access; to cut cross-border assistance to make a political point; to make access to aid a political tool; and to spend the state’s resources not on improving the welfare of its people, but rather on waging war.

Put another way, the problem facing Syria’s health sector is not sanctions, but the fact that the regime is more intent on bombing hospitals than building them.