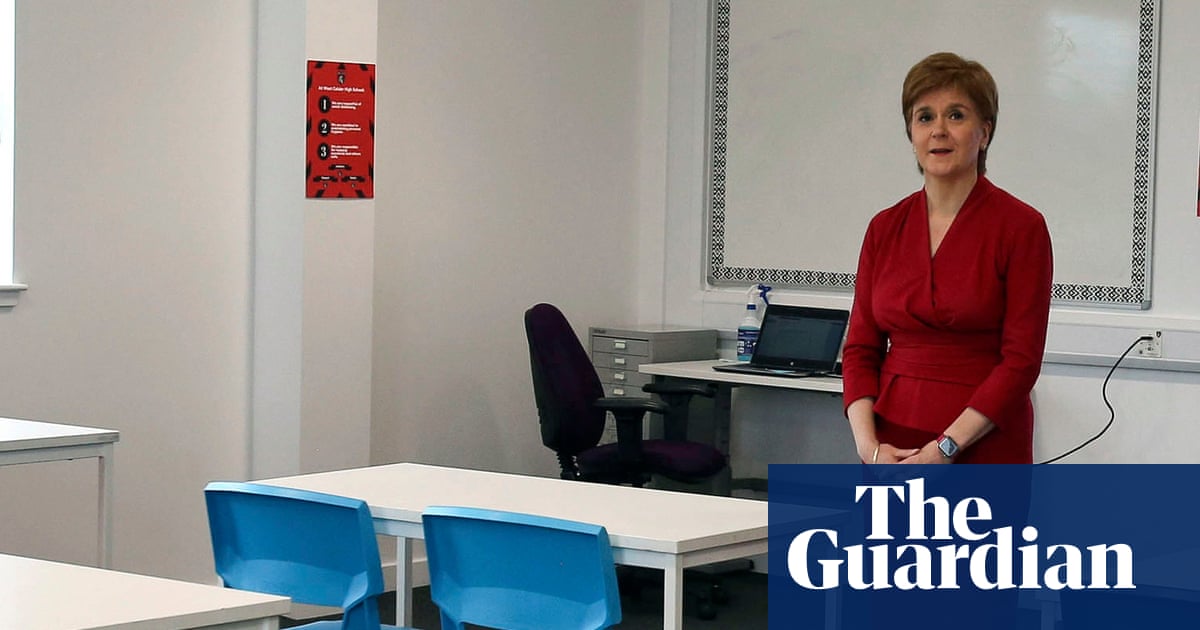 An entire class of Glasgow primary children and their teacher have been told to self-isolate after one pupil tested positive for coronavirus.

Families at St Albert’s primary, Pollokshields – which reopened for the first time since lockdown exactly a week ago – were contacted earlier on Wednesday by public health officials and told to quarantine for 14 days.

Each child in isolation has also been issued with an iPad so that lessons can be taught remotely. It is understood that there are between 20 and 25 pupils in the class.

A spokesperson for Glasgow city council said “robust” infection control measures were in place at the school, adding: “There is currently no evidence of transmission within the school itself.”

It is one of a number of individual cases of coronavirus infection that has emerged at primary and secondary schools since Scotland’s children returned to full-time education last week.

At her daily briefing, Scotland’s first minister, Nicola Sturgeon, confirmed two more individual cases at schools in Johnstone and Dundee, and yesterday referred to single cases at primaries in Blairgowrie, Perth and Paisley. There have been four cases at two high schools in Coatbridge, Lanarkshire, and on Monday an additional case was confirmed in a cluster of 16 that has been linked to Bannerman high school, Baillieston.

On Tuesday, Larry Flanagan, the head of Scotland’s largest teaching union, the Educational Institute of Scotland (EIS), challenged Sturgeon to reassure teachers that schools were safe, explain why social distancing requirements were not necessary in classrooms and strengthen guidance on use of face coverings in schools.

While public health officials have emphasised that there is currently no evidence of transmission within the schools involved, there has been growing concern about young people gathering at house parties with no distancing, as well as parents gathering at school gates and families failing to quarantine after returning from holidays abroad.

Following evidence that recent clusters in Glasgow and Lanarkshire were linked via an indoor gathering, Scotland’s national clinical director, Jason Leitch, warned on Monday that “unregulated” house parties were a “real concern”.

But on Wednesday, Scotland’s children’s commissioner warned that young people were being scapegoated, while they are not receiving consistent advice about social distancing in and out of schools.

Bruce Adamson said: “Young people have been really amazing at sticking to the rules, and made huge sacrifices both in their education and socially, but I’m now worried that there does seem to be scapegoating going on with some very mixed messages.

“I worry that some statements from politicians seem to be apportioning blame or suggesting that young people are putting others at risk.”

Asked about these comments at her daily briefing, Sturgeon said: “I do fundamentally disagree with the idea that we are trying to scapegoat anybody. This is an infectious virus, it’s nobody’s fault. But I’ve also got a responsibility to the nation to point out what we understand from the evidence are the higher risk areas for transmission … Young people do like gathering together, it’s not blaming them for that to point out it is a risk.”

Australia’s Tasmania is coronavirus-free, but economy reels from closed borders