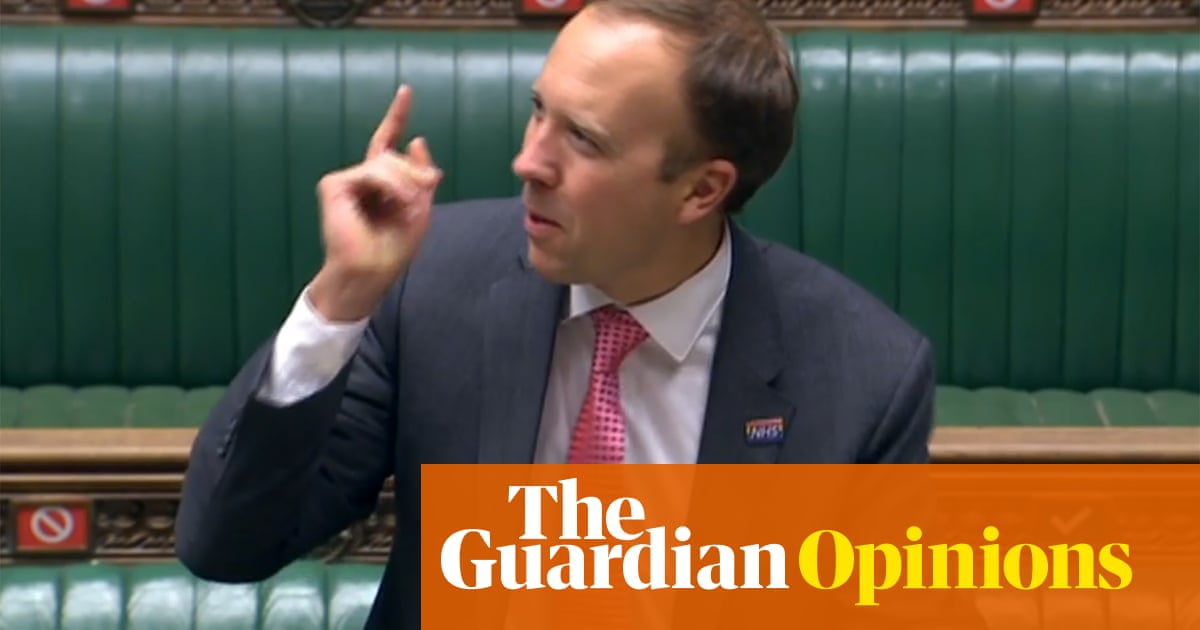 In recent months, Westminster has slid so far through the looking glass that there must be a severe shortage of psychedelics on sale in SW1. Forget – just for a moment – that the government is now openly boasting about breaking international treaties in its bid to become a failed state and start to sweat the smaller stuff. On Tuesday, the health secretary gave a statement to the Commons in which he completely forgot why he was there and only revealed what he had meant to say about extending lockdown restrictions via leaks to journalists later that evening.

No matter. The following day, the prime minister gave a Downing Street press conference in which he merely repeated all the things Matt Hancock had said on Twitter the night before. So there was something entirely predictable about Matt returning to the Commons on Thursday to repeat all the things he had meant to say on Tuesday but were already in the public domain thanks to his own Twitter leaks and the Boris Johnson press conference. It would surprise no one if No 10 were to hold another presser tomorrow to clarify what Hancock had said today.

One of the glories of Matt – the thing that makes him a near national treasure – is that he has no idea that it is the seriousness with which he now takes himself that makes him a laughing stock to the rest of us. There was a time early on in the coronavirus pandemic when Hancock was a regular kind of guy. Not the sharpest minister on the block – even with the bar so low – but a man of some decency who was clearly committed to trying to do the right thing. But over the last few months, the more mistakes he has made over late lockdowns and crap test-and-trace systems, the more he has come to believe in himself as the archetypal Nietzchean Superman. A mini-Boris.

Hancock began by repeating all the stuff about the “rule of six” that he and Johnson had already told everyone several times already and, for the most part, he was heard with polite boredom. It was when he got on to Operation Moonshot that open laughter could be heard from both sides of the chamber.

The idea that the government could get to a point where 10 million people could get a test result every day within 20 minutes is – even with Tigger’s natural enthusiasm – a patently absurd proposition. As is the idea that the government’s 500,000-tests-a-day target could be reached by the end of next month, given that the current test-and-trace system is delivering worse results week on week and people are being encouraged to make 700-mile round journeys just to get a stick poked in their gob. It was just as well that Jacob Rees-Mogg wasn’t in the chamber to put the health secretary right on a few details. There again, the leader of the house is in self-isolation as one of his children has displayed Covid-19 symptoms and is still waiting for his test results five days later.

But for Matt, the laughter was a humiliation too far. Breaking from his script, he leapt into a bizarre rant about how the whole world was against him. How he had only tried to do his best, how the wrong people had been turning up for tests despite it being government policy for anyone who was in any doubt if they had coronavirus – including those who might be asymptomatic – to get themselves tested. All those laughing at him were just nay-sayers. They had laughed when he had set himself previous targets and they would be laughing on the other side of their face when he also failed to meet his new targets.

The shadow health minister, Jon Ashworth, gently pointed out that Labour actually supported the new lockdown restrictions. It was just all the other doggybollox about how well the test-and-trace system was working and the game-changing Operation Moonshot that he had a problem with. Just how much did he think it was going to cost – leaked documents suggested £100bn – and how likely was it to come in to effect within the next few months? Nor was there much comfort for Tigger from his own benches as Jeremy Hunt, chair of the health select committee, inquired just how much of the required technologies for Operation Moonshot actually existed.

Matt now suffered a mini-breakdown. His eyes transformed into a computer’s circle of doom. He had spent at least £500m on Operation Moonshot, he said defensively. Which just left him another £99.5bn – more than the entire defence budget – to find in the next couple of weeks. Piece of piss. Why were people so exercised about petty cash? And why so keen to rubbish what was clearly a coronavirus game-changer when new technologies were coming on stream every day? Even if they weren’t?

The session ended with several opposition MPs querying what powers the new Covid space marshalls would have. Would they be issued with tasers and uniforms modelled on the seminal 1970s sci-fi series Blake’s 7? Would they be allowed to bust into homes and search for illegal relatives trying to bunker down in cupboards for Christmas? Matt choked a little – people should show a little more respect for the UK’s newest crimebusters – before saying this was all still very much on a need-to-know basis.

What he didn’t say was that it was abundantly clear that Hancock himself wasn’t included on the need-to-know list and was just making it up as he went along. Still, it could have been worse. He could have been the attorney general, Suella Braverman, having to display her total ignorance of the law as she tried to explain to the EU that rogue states were entitled to do what they wanted. Matt might have embarrassed himself today, but on nothing like the scale of Braverman. She took uselessness to a completely new level. She probably wasn’t even capable of writing a legally binding letter of resignation.