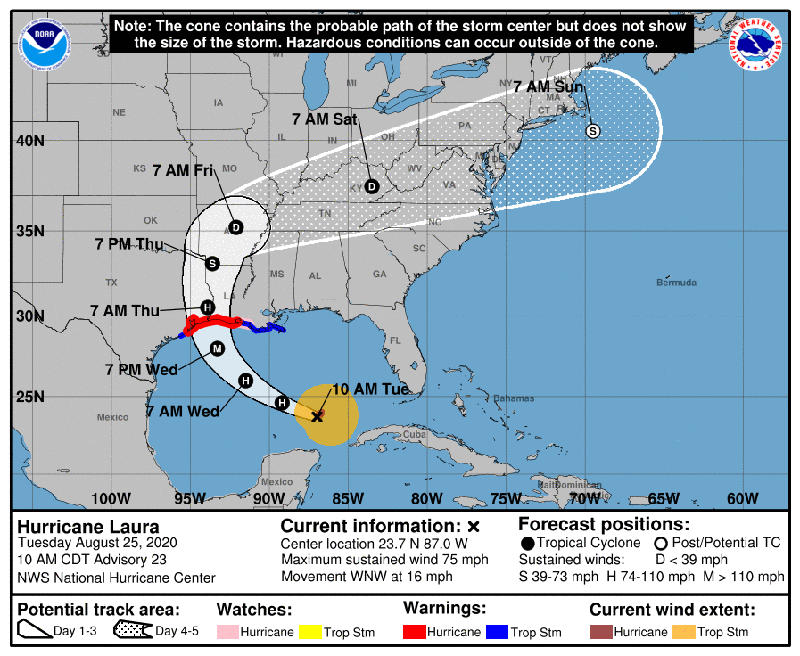 While Hurricane Marco weakened to a tropical storm and again to a tropical depression by the time it reached the United States, it appears that Hurricane Laura could still hit as a Category 3 storm or stronger. According to the National Hurricane Center (NHC), Laura is forecast to reach the northwestern Gulf Coast at or near major hurricane intensity Wednesday night. The NHC adds that storm surge, wind and rainfall hazards will extend far beyond Laura’s center along the coast.

“There is the danger of life-threatening storm surge accompanied by large and dangerous waves from San Luis Pass, Texas, to the mouth of the Mississippi River, including areas inside the Port Arthur Hurricane Flood Protection system,” the NHC says. Residents should follow any advice given by local officials; actions to protect life and property should be rushed to completion.

The threat of widespread flash and urban flooding will be increasing Wednesday night into Thursday from far eastern Texas, across Louisiana and Arkansas. Heavy rainfall is potential in middle Mississippi, lower Ohio and Tennessee Valley later in the week.

Laura is now the fourth hurricane of the 2020 Atlantic hurricane season Tuesday morning, according to The Weather Channel. Laura is centered more than 600 miles southeast of Lake Charles, Louisiana and is tracking to the west-northwest at just over 15 mph. The Weather Channel adds, “there may still be subtle, yet important changes to the track and intensity forecast over the next day or so.”

Two Storms Could Hit U.S. at Same Time Next Week

Costa Rica to Reopen to Six U.S. States in September