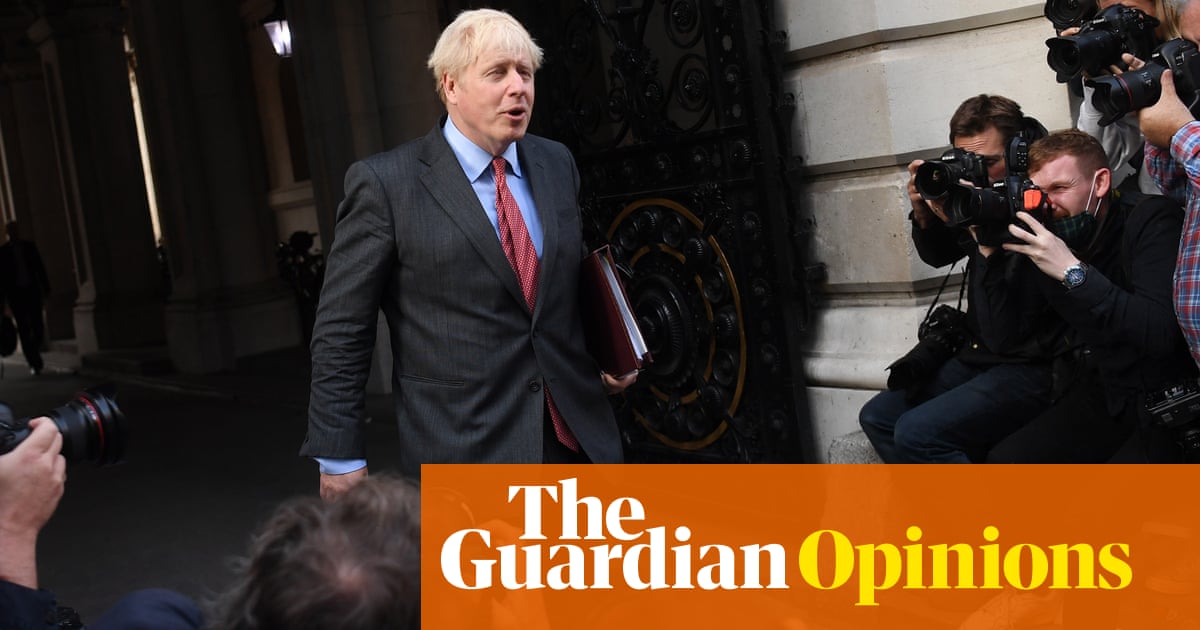 Making it to next summer would be an achievable target weight, at which point a shockingly youthful portrait of Johnson will be added to the Downing Street stairway, while the full attic version we can now see can be returned to the wild to … write lucrative newspaper columns about what the next government should be doing? We’ll come to the emerging holes in that plan later.

Alas, these are overly testing times for this prime minister, who we already know is too afraid to do the job without his emotional support psycho, Dominic Cummings. As a fable about being careful about what you wish for, the Johnson story could scarcely be more on the nose. In many ways the only way to make the point more clearly would be to strap Johnson in and force him to be prime minister for the rest of his life. Even now, watching him do the job has the air of a deliberate and grotesque psychological humiliation, like shaving the Honey Monster and forcing him to play Hamlet night after night.

Indeed, given Johnson’s increasingly well-publicised tendency towards self-pity, he may yet class “being made prime minister” as a form of bullying inflicted on him by the British people, who cruelly elected him to do whatever THIS is, when he thought it would just be making slow-motion videos of him walking through Downing Street like an absolute legend.

Today, British people were invited to enjoy the spectacle of Johnson shutting pubs – for an hour – and the irony of being hectored that they are “in the last chance saloon” by the very people who herded them back to the saloon and bought them half-price lunches there.

Three weeks ago, unnamed government ministers were trying to put the frighteners on anyone wary of returning to their offices, pointedly telling the Daily Telegraph that those working from home could be “vulnerable” to being sacked. Does this include Johnson, who famously works from his own home in Westminster’s Downing Street? This home is, by all the accounts we have been forced to endure recently, a ghastly little hovel, and his job a series of degradations and privations.

The Times on Saturday catalogued the baroque indignities visited upon Johnson’s personage therein, ranging from the impossibility of managing on a salary of £150,000, to not being sure he could afford a nanny, to having to pay for his own food at Chequers, and to Downing Street being “not a nice place to live … even if he and Carrie want to go into the rose garden they have to go through the office”.

Anyway, on and on it went. But in summary: oh dear. A hundred and fifty grand not enough, you say? Got to pay for his own food, you say? No nanny yet, you say? Got to walk through a something to get to a rose garden, you say? Yes, yes – I’m writing it ALL down, on my list of things I have time to give a 20th of a toss about in the year 3048.

As it happens, it has always seemed bizarre to me that UK prime ministers don’t have a bigger staff at Downing Street, in the manner of every other leader in the world. Whatever you think about whoever’s in power at any time, it can’t be the best use of their energies to be spending time having to think about what to make for supper. That said, Johnson is arguably the rare exception to this – it may well be more profitable to the nation to have him struggling to work out the oven instructions than doing any of what he seems to think is actual governing.

Either way, it’s irrelevant in the circumstances. Having read all the briefings, you have to marvel at the sheer WTF-ery of having a “friend” like this. Johnson has always preferred mistresses to mates, but the only reasonable explanation was that this “friend” was Rishi Sunak. If not, what on earth were they thinking, this person who judges that – in the middle of a punishing pandemic that can only lead to mass unemployment and further deaths – it’s in any way helpful to inform the newspapers that the prime minister can’t get by on £150,000? Read the room, guys! What is this? The launch of the Bung a Bob for Big Boz campaign?

For many of his disappointed longtime supporters, the fabled Johnsonian ability to read a room is what has vanished. Whatever happened to Boris? people keep asking. In fact, nothing happened to him. I hate to disparage the wellness and self-help sectors, but people don’t change – they just become more exaggerated versions of themselves one way or the other. The whale’s fine in the North Sea or maybe the London mayor’s office; if he makes it all the way up river to Westminster, it’s going to end with a tugboat and a tarpaulin. Even if some people did enjoy the spectacle and novelty for a few days.

Or to put it another way, this alternate timeline – the one where Falstaff becomes king instead of Henry – doesn’t really work. It might SOUND like an interesting counterfactual. But hand on heart, I have to prefer the Shakespeare version. It’s very sad, of course, when Prince Hal has to reject the old light entertainment sidekick, but I think ultimately we all understand: that’s showbiz.

By the time of The Merry Wives of Windsor, Falstaff – though still so short of money that he has only two servants, neither of which is a nanny – is performing work he is far more suited to. Namely, trying to shag two married women with as little effort as possible, being hidden in smelly laundry baskets, getting his arse justifiably handed to him in public, and ending up having a laugh about it all. This is a much better biographical arc than the one we’re stuck with: when this character type has to boss Agincourt/a deadly pandemic and its hideous economic fallout.

As for whether Johnson himself will be able to move from history back to comedy, that in itself increasingly feels like something that only happens in fiction. He won’t be short of money, of course – no ex-prime minister is – but that has never really been the thing he seems to have thought would fill his inner void. Far from sealing that chasm, the job he always wanted seems only to be making it deeper – in fact, there is no longer a bottom to it.

And surely part of Johnson’s widely briefed gloom is the realisation that even his plan for a prime ministerial afterlife has developed fatal flaws. Pontificating on what he’d do if he were in charge – well, even Telegraph readers will have been more than sated by having to live through the period when he was.

• Marina Hyde is a Guardian columnist