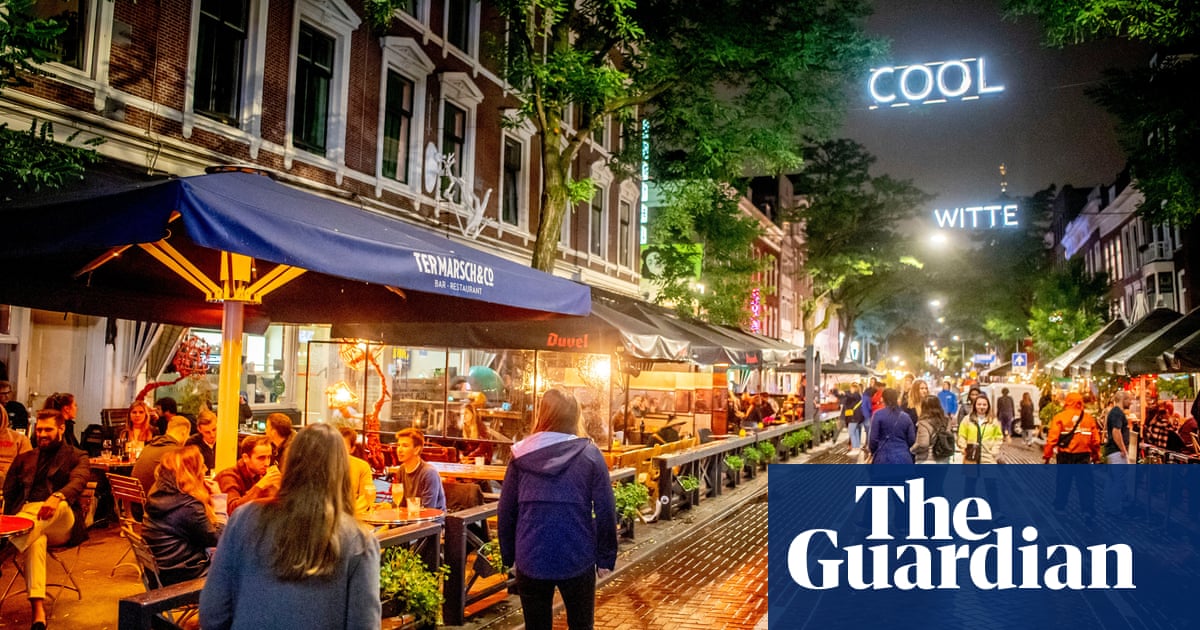 Where once there was parking, now there are decks. At the start of the year, Rotterdam’s Witte de Withstraat was a car-choked thoroughfare. Today, cars are banned after 4pm, locals stroll leisurely down the middle of the road and special wooden terraces have taken the place of parking spaces.

“The terraces are a fantastic solution,” says Iris Wulffraat, teh owner of Eetcafé Opa (‘Cafe Grandpa’) and Bierboutique. “They give the extra space we need right now. And they’ve been decorated in a very attractive way – there’s a completely different energy to the area now.”

It’s not just bars and restaurants that have benefited. MAMA, a contemporary art gallery, has installed seating and speakers so passersby can watch the video installations displayed in their huge windows.

The scheme is part of a phenomenon that has swept the world’s cities amid the coronavirus pandemic: parking spots reclaimed for pedestrians. In Rotterdam, the programme allows businesses to take over the parking spaces directly in front of their building, without a permit. Proprietors can lay their own but the municipality provides decks free of charge.

The decks are made from reclaimed and repurposed wood. The authorities handle installation and removal. So far, 1,000 have been installed across the city.

“Post-lockdown, we wanted to give all types of businesses as much physical space as possible to help them recover lost revenue,” says Tristan van Rijn, a spokesperson for Barbara Kathmann, one of three municipal representatives behind the scheme. “So we set up a special team to look at potential problems and hotspots, gave everyone the possibility to order a terrace and waived all permit requirements. We moved quite fast to achieve this.”

The reallocation of urban space has become one of Covid-19’s most tangible effects on the built environment. Cities are being forced to innovate and the car is bearing the brunt.

Car-free days and restrictions in city centre driving are nothing new but councils are looking beyond simple traffic bans to more fundamental redevelopment. They are also introducing ideas that challenge decades of orthodoxy in urban planning and design.

Oakland, California, has converted many neighborhood streets into pop-up “slow streets”, closed to car traffic. In London, the mayor, Sadiq Khan, introduced Streetspace for London, including temporary cycle lanes and wider pavements. In Paris, the plan is for 650 new kilometres of pop-up “corona cycleways”, and the removal of 72% of on-street parking. “The current health crisis forces us to rethink our mobility system,” Valérie Pécresse, the president of the Île-de-France, explained to Le Parisian.

Even Vilnius, Lithuania, with its typically cool, rainy summers, made an effort to turn public streets into an open-air cafe.

Parking spaces have proved the perfect way to reclaim the required land. Many people are working remotely and inner cities have had huge drops in visitor numbers. American cities have been particularly aggressive in this regard. Portland, Oregon, was one of the first to seize on parking spaces with its Come Thru Market. The initiative connects black and minority ethnic farmers with customers through local parking lots in disadvantaged neighbourhoods. Las Vegas has erected tented shelters and “cooling centres” in unused parking lots for homeless people to take refuge and access services.

The pandemic has allowed many of these initiatives to be implemented with a minimum of fuss; the Rotterdam scheme was up and running in two weeks.

“Things are happening at a pace that no one has really seen before,” says Adam Tranter, an urbanist and the bicycle mayor for Coventry. “The only thing required is political will and leadership.”

The pandemic has provided that and has swapped what Tranter calls the “battle for space” – one that retailers and motorists have traditionally dominated – in favour of “liveable streets”, where people can mingle without being subject to traffic and exhaust fumes.

“We need to make sure that when people do drive into cities, they’re not doing so at the inconvenience of those on foot or on bike,” Tranter adds.

Uncertainty about the future of Covid-19 aside, some predict the most profound changes may not be about tweaks to existing infrastructure but the possibilities in districts yet to be built. China has recently accelerated plans for a huge, car-free district in Shenzen, “designed for and about people”.

Experts say it remains to be seen whether there is enough momentum from ordinary people to demand existing city neighbourhoods permanently reject cars. The drop in air pollution is clearly a boon to most people’s daily lives but weather will play a part, too: northern European winters are not overly conducive to outdoor life.

The Rotterdam terrace scheme ends on 1 November. It’s too early to say whether it might return next summer, says van Rijn. “We have to evaluate the impact it had on businesses, traffic and residents.”

After all, not everyone on Witte de Withstraat believes the change has been entirely for the better. “We’re happy to use the decks, they’re a great temporary solution,” says Kim de Haas, MAMA’s daily manager. “But I wouldn’t be a fan of having them permanently installed.”

“We have customers from all over the country who prefer to park outside to load up their purchases,” says Maurits Haagman, who runs RSI The Attraction, a skate shop. “Having parking in front of our door is one of the good things about this location.”