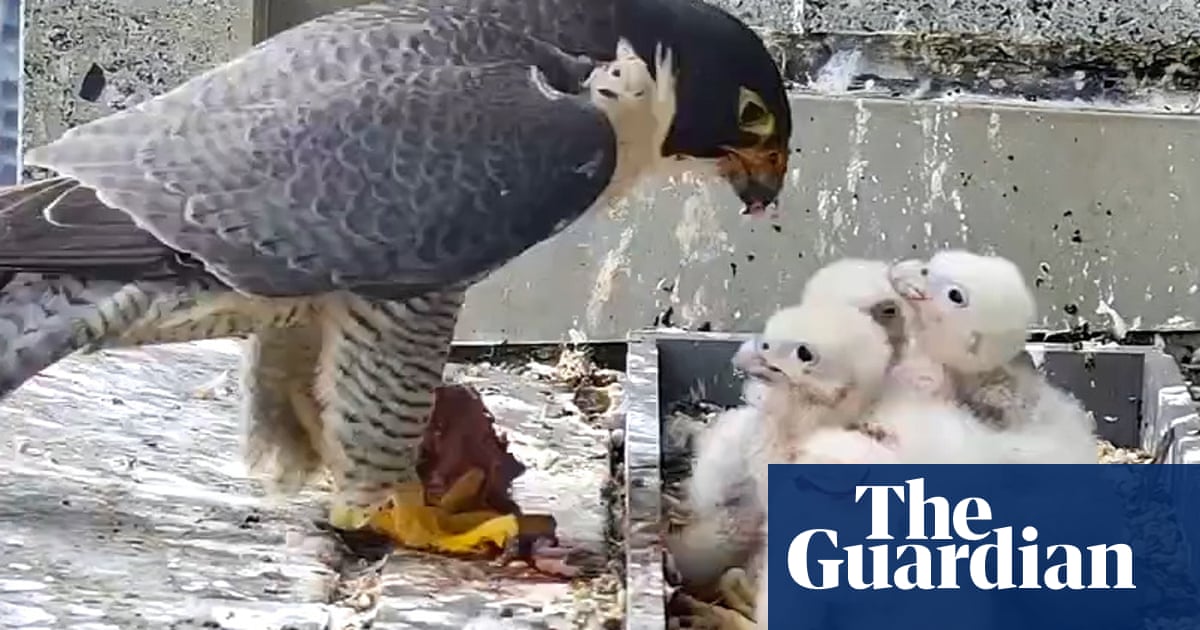 Exactly two weeks ago, the kids arrived. All three. Since then the Collins Street falcons, who live in a small nook above the now-empty CBD, have become Melbourne’s favourite family.

Thousands of people tune in every day to a 24-hour webcam stream of the nest, located on the side of a skyscraper, hosted on YouTube and the building’s own special website.

For residents of the locked-down city, the feathered friends have become a symbol of freedom and a source of joy. Like restricted Melburnians, the falcons only seem to leave home for the essential reasons of work or obtaining food (in their case, live pigeons, rats and sometimes fish).

The birds already had a cult following prior to lockdown – having nested in Collins Street for years – but their popularity has grown exponentially since their young popped out of their shells on 2 October.

Dr Victor Hurley from BirdLife Australia said that a Facebook group dedicated to the falcons now has 11,600 members – up from “five or six hundred” last year.

“A lot of people in lockdown in Melbourne have been fascinated by this experience,” he told Guardian Australia. “That is understandable and delightful.”

Highlights among the avid avian-watchers include the day the eggs were laid, the day they hatched, their first meal and when one of the chicks briefly hopped out of the nest.

“There is a certain level of, how to put it politely, obsession, bordering on obsession with minutiae,” Hurley told Guardian Australia. “I tend to be a bit more relaxed about it.

“Someone suggested we should put a fence on the ledge to prevent them falling off. They nest on ledges on cliff tops [and] are the most widely distributed terrestrial vertebrates on the planet after humans. They are the product of 3m years of evolution, they have probably figured out how to do this.”

A post from Friday with nearly 500 likes celebrated the eyases two-week birthday, complete with photoshopped party hats and balloons. Other users have nicknamed the three Larry, Curly and Moe or Huey, Dewey and Louie.

Hurley said school teachers had told him their classes were watching the falcons, which he hopes becomes a good lesson in the importance of maintaining green spaces in the city.

“It’s a good educative thing. If people can’t get out in nature, there is nothing wrong with bringing nature to their classrooms via the internet.

“The green space in Melbourne is what generates the prey and what allows the predator to live. The link is really strong, it’s a really positive lesson about keeping that green space.

“Everyone is thrilled about the idea of a predator living in Collins Street other than corporate bankers,” he said. “A different kind of predator. A natural-born one.”

All three eggs were laid six days apart, but hatched within three hours of each other, which is a common way of synchronising hatching.

“The mother delayed incubation until about a day after the last egg was laid,” Hurley said. “That delay allows them to cool down, and once she reheats them to body temperature, that sets off the biochemical reactions that lead to the development of a chick.

“That allows the egg to hatch in a synchronised fashion, which means they don’t get a large age discrepancy. Though falcons are very egalitarian and don’t tend to have siblicide, the oldest one does usually waddle first and eat first.”

The falcons usually breed every spring, but in past years, tragedy has struck.

In 2019, one of the chicks died, on camera, and its body was left on the livestream for days.

But Hurley said this year would be cheerier. He said last year’s deaths were the result of severe drought conditions, which have since lifted.

“It often occurs in drought years … because the prey is that much more stressed. When they get more stressed their parasite loads increase and the young become infected and it takes them out.”

This year, he is confident the young will be ready to fly in a month, leaving their mother’s nest and venturing out into the world on their own..

“They will be flying in mid-November,” he said. “I’m anticipating a successful spring for them.”

And once the kids are off, the parents will return to their lives, and mostly likely breed again next year.

“They tend to mate for life,” Hurley said. “But there is a really, really quick turnover rate if one of the pair dies. They usually get replaced within days. So they mate for life until you are dead.”