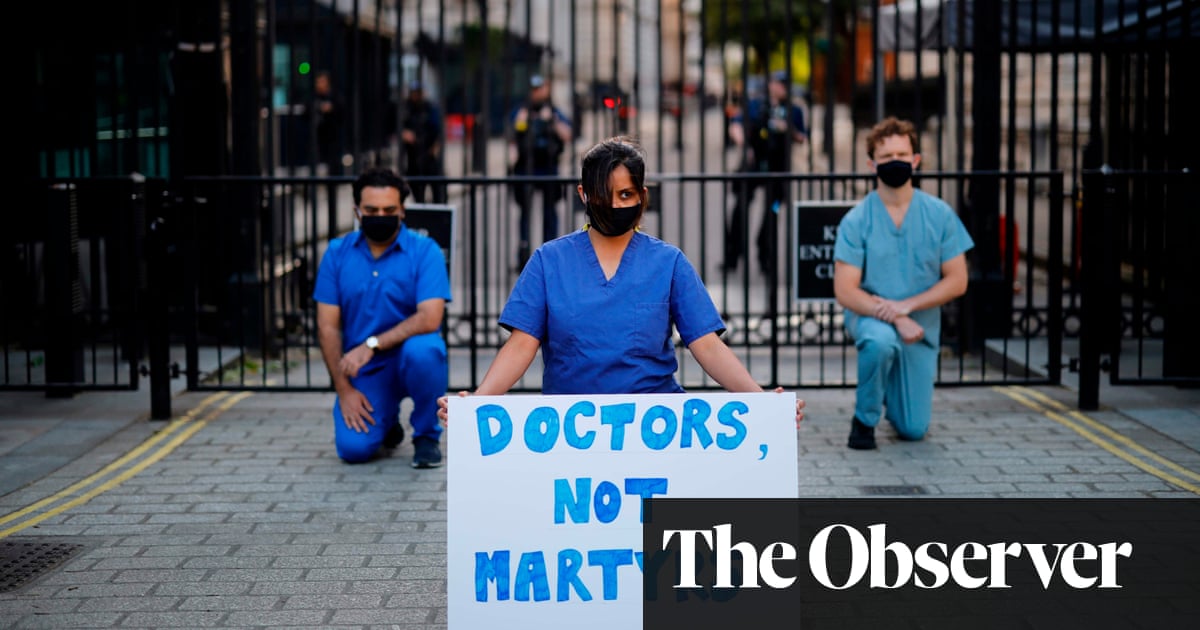 Over 1,000 doctors plan to quit the NHS because they are disillusioned with the government’s handling of the Covid-19 pandemic and frustrated about their pay, a new survey has found.

The doctors either intend to move abroad, take a career break, switch to private hospitals or resign to work as locums instead, amid growing concern about mental health and stress levels in the profession.

“NHS doctors have come out of this pandemic battered, bruised and burned out”, said Dr Samantha Batt-Rawden, president of the Doctors’ Association UK, which undertook the research. The large number of medics who say they will leave the NHS within three years is “a shocking indictment of the government’s failure to value our nation’s doctors,” she added. “These are dedicated professionals who have put their lives on the line time and time again to keep patients in the NHS safe, and we could be about to lose them.”

In all, 1,758 doctors across the UK responded when DAUK undertook an online survey among its members. It asked: “Has the pandemic and the government’s treatment of frontline doctors during the pandemic impacted your decision to stay or leave the NHS?”. Almost seven in ten – 1,214 (69%) – said that it had made them more likely to leave the health service, while 26% said that it had not.

When asked “where do you see yourself working in the next one to three years?”, almost two-thirds of doctors – 1,143 (65%) – said they would be leaving the NHS. That finding has prompted renewed concern about NHS understaffing, as the service in England already has vacancies for 8,278 doctors, according to the most recent official figures.

I’m sad to leave a system that still provides such great care. But I’m done sacrificing my mental and physical health

The most common reason for planning to quit, cited by 74% of respondents, was what DAUK said was the lack of a real-terms pay rise. While the government recently announced a 2.8% pay rise for many doctors in England, including consultants, it does not cover trainee doctors or most GPs.

Other key factors included a lack of personal protective equipment (65%), doctors not being allowed to speak out publicly (54%), repeal of promises to NHS staff made during the pandemic, such as free parking (46%), and the impact of the crisis on their own mental health (45%).

Some respondents contrasted the respect shown to NHS staff for their work looking after patients with Covid-19 through 10 weeks of “clapping for carers” with what they said was ministers’ disdain for them, for example when accusing them of using too much PPE.

One doctor said: “I feel the government regard NHS workers as cannon fodder generally. Poor pay, poor conditions, inadequate PPE, flimsy promises made for political gain. After 20-plus years in the frontline, I am burned out, sick and unsupported.”

Another doctor, from an EU country, said they planned to return home as a result of the fiasco over high taxes levied on NHS doctors’ pensions and “the xenophobia and at least weekly mockery of my accent (from consultant colleagues and other staff),” adding: “I’m absolutely certain I’m making the right decision but also sad to be leaving a system that, despite all, still provides such great care. But I’m done sacrificing my mental and physical health for it.”

Batt-Rawden added: “Frontline staff have been left feeling exploited and expendable. Is it any wonder so many are now making plans to leave once the pandemic is over?”

Labour’s Justin Madders, a shadow health minister, said: “It comes as no surprise that the government’s incompetent handling of the pandemic has pushed many doctors into thinking about leaving. Against a backdrop of years of pay restraint, it seems that they feel their recent efforts in the fight against coronavirus are not appreciated.”

The Department of Health and Social Care said it was “extremely proud” of NHS workers. “We want all staff to be able to work flexibly and to access the practical and emotional support they need to look after their physical and mental health, and the NHS People Plan published last month demonstrates our commitment to making the NHS the best possible place to work.

“We have been working tirelessly to deliver PPE to protect people on the frontline, with over 3.1bn items delivered and more than 31bn ordered from UK-based manufacturers and international partners to provide a continuous supply,” a spokesperson said.