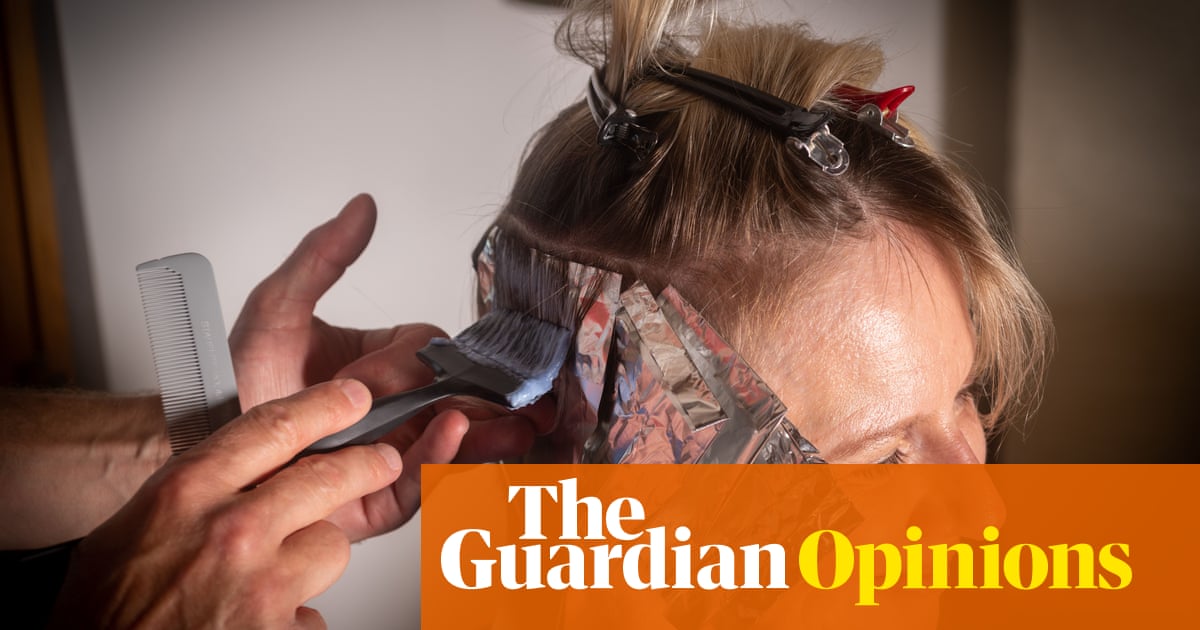 As the US army rolls into a newly liberated Paris, a woman sits serenely under the only working hairdryer in the city. The war photographer Lee Miller’s iconic shot of a salon reopening amid the rubble in the summer of 1944 could easily have become an image of heartless vanity when Vogue published it. Who cares about a hairdo, when millions have died?

Yet at the time it somehow managed to convey both ingenuity and hope, in a world far enough steeped in death to long for a little frivolity. The return of being able to care about something that doesn’t actually matter must have come, in the circumstances, as a blessed relief. When Boris Johnson announced the reopening of British hairdressers this July, Miller’s picture sprang to mind.

Lockdown and the gleeful decline of sartorial standards that came with it – who cares, when nobody’s going to see? – have undoubtedly made many women think about how much time and money we wasted down the years constructing a facade for other people. After months of barely lifting a hairbrush, and yanking on a clean top only for Zoom calls, the whole business of heels and lipstick still seems faintly preposterous.

Like all near-death experiences, the pandemic is meanwhile triggering in some a broader resolve to live more simply in future: to move out of the big city and keep chickens, to shop less, to hang out with the kids rather than rushing them from one improving activity to another, to stop endlessly keeping up with the Joneses. It’s not limited to those who are middle-aged and settled, either.

The journalist and podcaster Pandora Sykes, in her forthcoming book How do we know we’re doing it right?, describes a millennial generation that has never had so many options in life but is increasingly paralysed by the fear of choosing the wrong one. Her peers are, she writes, struggling to keep up with the vast array of social, cultural and professional choices facing them; drowning in fashion trends that change almost faster than they can shop, or cult Netflix shows they haven’t got time to watch.

Sykes’s collection of essays, written pre-pandemic, could have read like a relic from a pampered bygone age with nothing bigger to worry about. Yet instead it feels like a clear-eyed warning of the world to which we may now be returning. July brings hard choices about how much of that manic old life we will resume given half a chance. And the answer, I suspect, is: more than we think. When hairdressers reopen, expect a stampede to the sinks.

This isn’t about confidence or lack of it in the government’s planned reopening, pushed through despite warnings that it’s too much too soon. (Although it is perhaps significant that Downing Street’s own research reportedly identifies a pattern where any easing of lockdown triggers initial alarm and reluctance, followed two weeks later by most people taking advantage once they see others doing it.) It has more to do with the power of inertia.

After every crisis, great thinkers declare that life will never be the same again. But more often than not, some things change and a surprising amount stays the same. People did not desert big cities en masse after 9/11, as some predicted, despite the continuing terror threat. Commuters avoided the tube for weeks after the 7/7 bombing, but settled back into their old patterns as the fear receded and the weather got colder. Covid-19 will change the big picture in some profound ways just as those events did, but once it’s finally over – perhaps not this year, or even next – the gravitational pull of old habits may prove surprisingly strong on an everyday level.

So long as women continue to be judged on what they look like, then we will continue to care about it, and hairdressers will be busy. So long as some pushy parents furiously overschedule their children, others will feel obliged to compete. Once we’re all out living public lives again and watching others live theirs, the corrosive fear of missing out – on parties to which everyone else was seemingly invited, career opportunities, some vaguely defined cultural zeitgeist – will seep back. The biggest thing stopping us returning to this busy and sometimes draining normal when the virus recedes won’t be a longing for simplicity, but the fact that millions may still be struggling financially or anxious for their jobs.

Of course, there will be lives transformed: companies that never make their staff return to the office, individuals fleeing the big city for the sticks, shoppers staying loyal to the independent stores that saved them when they couldn’t get a supermarket delivery slot, women who never bother dyeing their hair again. Good for them. But don’t underestimate the pressure to snap back to something like normal, either. The pandemic will change us. But, for good or ill, it probably won’t change us as much as we think.

• Gaby Hinsliff is a Guardian columnist