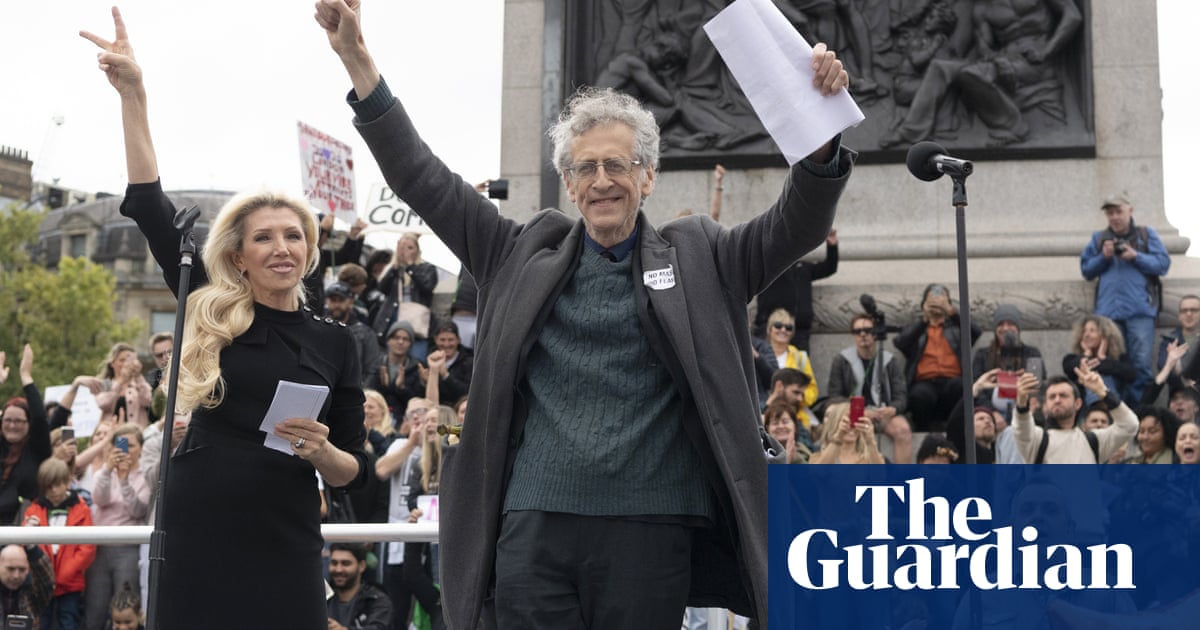 Piers Corbyn has become one of the first people to receive a £10,000 fixed penalty under new coronavirus laws restricting public gatherings of more than 30 people.

The weather forecaster and climate change denier, who is the older brother of the former Labour leader Jeremy Corbyn, was arrested and fined for his part in organising Saturday’s demonstration in central London against lockdown restrictions.

He said he was arrested on the stage set up in Trafalgar Square at the end of the event, while protesters marched off down Whitehall.

The 73-year-old told the Guardian: “After the rally had finished, I was saying goodbye to people … I was just looking around thinking I had better go now, and then they [the police] just grabbed me from behind.

“I was not expecting it at all. They frogmarched me – they didn’t handcuff me – and told me they were arresting me for contravening the coronavirus regulations for organising a gathering of more than 30 people.”

Corbyn said he was held for 10 hours by police and told officers he and other organisers had filled out all the necessary risk assessments and spent two weeks negotiating with Scotland Yard over the event. He said he planned to challenge the fixed penalty notice in court.

The rally’s stated aim was to call for the repeal of the Coronavirus Act, passed in March, which gave the government sweeping new powers, but many of those attending carried placards claiming the virus itself was a “hoax” or “scam”.

It drew a broad coalition of protesters from across the country from those espousing causes such as opposition to the imprisonment of Julian Assange to so-called “anti-vaxxers” and advocates of 5G and QAnon conspiracy theories. One individual was pictured brandishing the flag of the British Union of Fascists.

Under new changes to regulations, those attending a gathering of more than 30 people may be committing a criminal offence.

The Metropolitan police said a man was arrested in Trafalgar Square at 3.25pm on Saturday on suspicion of breaking the new Health Protection Regulations 2020 and that he was informed on Sunday that a fixed penalty notice would be issued for £10,000 for the offence of holding a gathering of more than 30 people in an outdoor place.

It is not the first time Corbyn has been arrested for allegedly breaking coronavirus rules. In June he was charged with two counts of breaching the regulations after he was pictured at a protest against 5G in Hyde Park on 16 May, and at another protest on 30 May. He is due to appear in court on 23 October for a trial on the two counts of organising gatherings of more than two people not from the same household.

Corbyn’s fine comes after the Met last week dropped a threat to investigate the organiser of another protest on suspicion of breaching coronavirus regulations, after accepting that as a political protest it was exempt.

Police wrote to Ken Hinds, a community activist based in Haringey, north London, after he asked them to help facilitate a protest march from Notting Hill to Hyde Park on Sunday, warning him that by merely publicising the protest he may have already broken the law.

After an urgent legal challenge accusing the Met of discrimination, a lawyer for the force wrote again to admit that Hinds and his organisation, Communities Against Violence, did fit the criteria of a “political body”, as outlined under the regulations. The march went ahead as planned on Sunday with about 400 people attending.