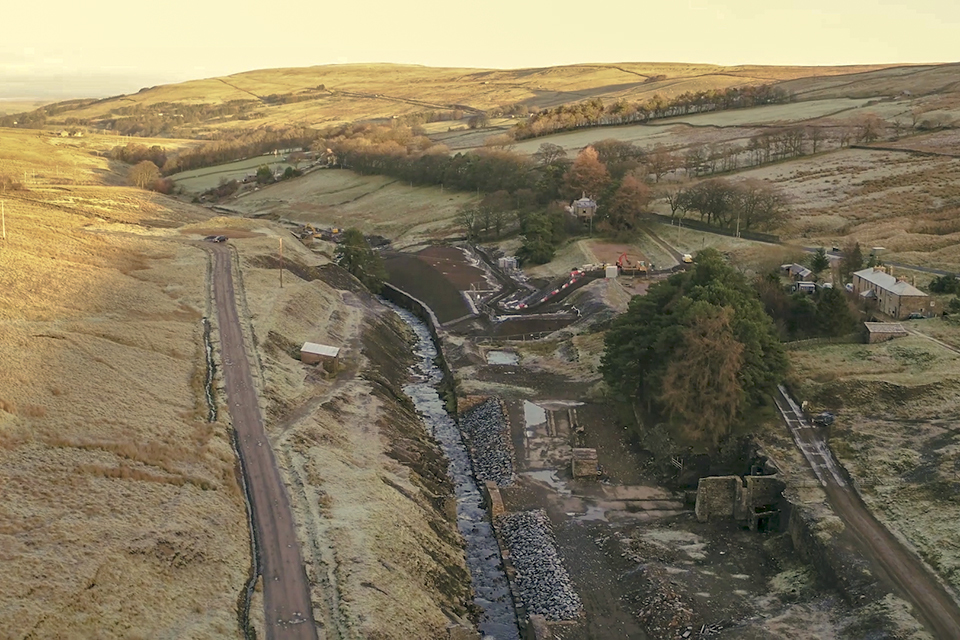 A £2 million engineering project at a nationally important archaeological site is cutting pollution in the north east of England.

Mining took place for 200 years at Carrshield in the North Pennines Area of Outstanding Natural Beauty, but the wastes – known as tailings – left behind after processing lead and zinc ores were being washed into the River West Allen and damaging the environment.

The site was on Historic England’s register of at risk scheduled monuments because the 19th Century dry stone wall that kept the mine tailings out of the river was beginning to fail and at significant risk of suddenly collapsing, which could have caused 1,000 tonnes of lead, zinc and cadmium to severely pollute the river.

The Coal Authority and Environment Agency carried out investigations over several years to decide how to cost-effectively stop the river being polluted, while preserving the unique industrial heritage at the site.

The river was eroding the wall and, at the same time, rain falling on the mine tailings was washing about 3 tonnes of metals into the river each year.

Set in a remote location, the area has the potential for rapid changes in weather conditions and river flows, which increased the difficulty of construction, and a large crane was used to allow staff to work safely next to the river.

The very high concentrations of lead and zinc in the tailings meant rare calaminarian plants were growing in some areas, which needed protecting as they are an important part of the biodiversity of the area, and specialists made sure the work was carried out without damaging the archaeology and ecology.

The long-term solution involved re-profiling the mine tailings and installing an impermeable capping layer and perimeter drains to stop rainfall washing metals out of the wastes.

Damaged sections of the walls were rebuilt using concrete blocks and then faced with local stone to blend in with the existing walls.

A thin layer of mine tailings was placed on top of the cap and planted with local seeds, including the calaminarian plants, to increase the biodiversity and maintain the industrial nature of the site.

Unfortunately lots of wastes containing high concentrations of metals have already entered the West Allen, so a trap was installed in the river downstream of Carrshield to capture contaminated sediments so they can be removed from the river.

The project is part of the Water and Abandoned Metal Mines (WAMM) programme, a partnership between the Environment Agency, Coal Authority and Department for Environment, Food and Rural Affairs, to make our rivers cleaner and healthier to benefit people, wildlife and the economy.

This is a nationally important archaeological reminder of Britain’s industrial past, which is set within a very challenging environment.

Thanks to the planning and management of the scheme and good partnership working, it has proved that a scheduled monument site can be sensitively, but robustly repaired.

The work was essential and will protect against catastrophic failure and the long-term erosion of contaminated mine wastes directly into the local river system.

This is one of our many projects within the North Pennines that are designed to clean up more than 150km of rivers in the South Tyne catchment, which are polluted by cadmium, lead and zinc from abandoned metal mines.

These metals harm fish and river flies, and ultimately end up contaminating sediments in the Tyne estuary.

Historically this industry played a major part in Britain’s history, but these mines are the source of half the metals found in our rivers and around 1,500 km of rivers are polluted in England.

The government’s 25 Year Environment Plan and the Northumbria River Basin Management Plan make it clear that cleaning up this chemical pollution is a priority.