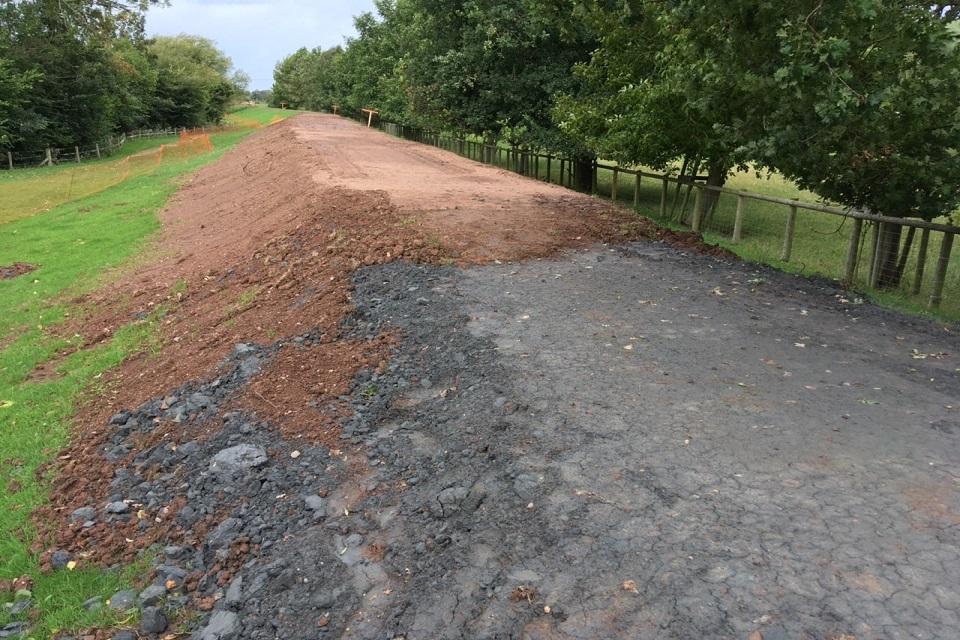 The work includes the repair of the 3km long flood embankment of the River Lugg. The bank was overtopped by the river in the February floods when the Lugg reached its highest level ever recorded.

Storms Ciara, Dennis and Jorge caused extensive disruption and severe impacts with many areas flooded in February. Two severe flood warnings were in place at Hampton Bishop along the River Wye and River Lugg.
The ground was already sodden from last autumn’s heavy rains and floods and the area quickly became flooded, with many rivers, including the River Wye at Hampton Bishop reaching the highest ever recorded levels.
Despite this, our flood defences protected approximately 150 properties (residential and commercial) in Hampton Bishop, which otherwise would have flooded.

The work at Hampton Bishop also includes repairs to the River Wye embankment, which, whilst it did not overtop in the floods, was damaged by the prolonged high levels of the river. Repairs will also be made to the nearby Mordiford bridge and flood wall to rectify the erosion caused by the February floods.

The Hampton Bishop repair work is one of 41 projects in an £8m flood recovery programme currently in the pipeline across the West Midlands area1 to repair flood defences damaged in the February floods.

Making sure our flood defences are in a good shape to protect communities is a priority for the Environment Agency. As part of the Hampton Bishop project, work has now started on repairing the flood embankment on the River Lugg to reduce the risk of flooding to the local area. We are expecting to have all of the work we are carrying out in this area completed by November 2020.

Hampton Bishop is on the confluence of the River Wye and River Lugg, which both reached the highest levels ever recorded in February this year. Pressure was put on many of our flood defences caused by the high volume of water in both these rivers.

Since then, whilst adhering to government guidance, we have been inspecting our defences to check for the need for repairs so we can ensure they are ready for any future floods. We have also used drone surveys to help with the process.

Environment Agency teams work around the clock to help protect people from flooding, but flood risk can never be eliminated completely, everyone still has a responsibility to take steps to protect themselves.
Check whether you’re at risk of flooding, and sign up to receive our free flood warnings, or call 0345 988 1188. By registering, you can choose how you’d prefer to be reached – by text, phone call to a mobile or landline, or even email – giving you vital notice to prepare if flooding is expected.

Since the floods in November 2019, the Environment Agency has checked 3,000 flood assets across the West Midlands1 and identified over 95 individual repairs that are required at a cost of £8m, to protect around 4,000 properties.

The repair works are being carried out by the Environment Agency’s contractors, Jackson Civil Engineering.

In the February floods 48 properties were flooded or impacted in Hampton Bishop.

The Environment Agency worked as part of an operational team alongside emergency response partners including Herefordshire Council, West Mercia Police, Hereford & Worcester Fire and Rescue Service and health partners to support residents and protect the most vulnerable.

We encourage all those who may be at risk of flooding to take steps to protect themselves by: