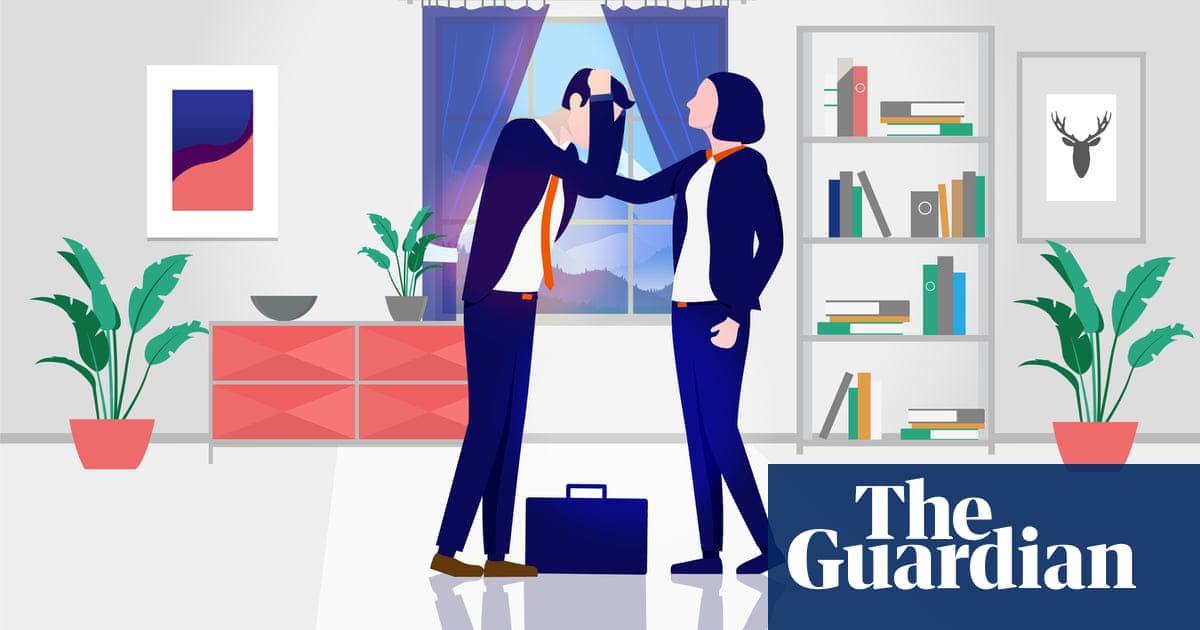 “Like having a brick thrown at you,” is how Belinda* describes the days following her sudden redundancy. “You have a certain view of yourself, and that sense of worth is tied to the job that you have.”

It was March. People were being let go all over the place. There was no way she could count on getting another job any time soon. She and her partner, George*, had bought their first home in the Sydney suburb of Kogarah a few years earlier and bills were high. Now, for the first time, she was going to have to rely on him for money.

She gets embarrassed to let George pay when they go out grocery shopping together. Sometimes, she insists and puts the bill on her credit card, knowing all she is doing is racking up debt. “It’s not the best, but feeling like you can’t rely on yourself, have that independence – it’s in a way shameful.”

For George, the pressures are different. “I know I can’t lose my job,” he says. “There’s a lot riding on me. In this economy, even if you’re the best worker in the world you can lose your job.”

With job losses and stand-downs widespread across the globe, millions of familial and romantic relationships now include a new element of financial dependence or support. Happening in the broader context of economic and social upheaval and stress, even for those who still have jobs, tensions in relationships can rise.

‘We didn’t set boundaries, and perhaps that was a mistake’

“The No 1, and probably only important thing, is to ensure there is really solid, open communication,” says Nick Tebbey, national executive officer of Relationships Australia. “If you move into a situation where one person in a relationship is reliant on another … there can be issues related to trust and guilt which may be misplaced, but are nevertheless natural.”


It’s got to be a strong, committed relationship before you jump into supporting someone, not only financially but emotionally

The new sole provider may have difficulty trusting that the other is spending their money wisely. The newly dependent person may experience guilt at having to rely on another for even the smallest purchase. “Those feelings may be there,” says Tebbey, but “it’s not necessarily a sign of a weak relationship if those things do bring about tension”.

Being honest about your feelings is important, but pragmatic conversations about spending and household roles are just as valuable. “Agree how you’re going to manage this time of changing dynamics in the household,” Tebbey explains. “If you’ve got that open, respectful communication there’s a lot that can be achieved.”

Lucia Vivianco, a musician and teacher living in Rome, did not lay out expectations with her partner after he lost his job and moved in to her apartment. “We didn’t set boundaries, and perhaps that was a mistake. But when you’re in love you don’t want to set boundaries – and that’s where it all goes tits up!”

After a year-and-a-half of supporting her partner, the relationship ended.

‘You need your creature comforts’

Belinda used to enjoy the freedom to buy things for herself or the house whenever she felt like it. Now, she checks herself, consulting with George first. He has always been a bit more conservative with spending.

As soon as she lost her job, Belinda put an immediate halt on spending and calculated how long they could survive on her payout. Now the pair communicate and compromise on purchases. Sometimes they’ll buy something non-essential, like a lemon tree sapling, if they agree they can afford the splurge.

“We’re not ascetics living on a mountain,” George says. “You need your creature comforts every now and then otherwise you might lose it.” It is important to do things which help the relationship feel special, Belinda says. Those gestures do not always require spending money. “We still go out for coffee maybe once a week. We have little routines together now, like reading at breakfast and playing with our cats.”

‘It doesn’t mean things are uneven’

Roles can change within a household once a person within it is no longer engaging in paid work. This can be particularly challenging for a person who has been the primary earner in a household, Tebbey says.

Associate Prof Gery Karantzas, director of the Science of Adult Relationships Laboratory at Deakin University, says that even in egalitarian relationships, roles and responsibilities may need to shift. “It doesn’t mean things are uneven, just that they are redistributed,” he says. He adds that a willingness to adapt the rules and norms within a relationship to meet new circumstances are as crucial as clear communication.

Belinda says she felt pressure to contribute more to chores after she stopped working, but ultimately they decided to keep the division of domestic labour as egalitarian as possible. The pair take turns cooking dinner, with George cleaning the bathroom on the weekends and so on. “We didn’t want it to feel like a big change,” Belinda says.

George says that is important to keep perspective. Between losing her job and 1 August, Belinda applied for 138 jobs.

Belinda says that venting to George, and listening to how he is feeling, is critical to both the health of her relationship and her own mindset. Burying those uncomfortable feelings, she says, “creates a weird tension”.

“I just try to take the approach that it’s a structural problem with the economy,” George says. “There’s more job seekers than there are jobs … if you take a step back and look at it more structurally you become more forgiving.”

Belinda is grateful for George’s understanding approach. He doesn’t talk down to her, she says. Instead, he encourages her, reminds her that they can get through this, and that they can plan ahead.

That financially dependent person is a whole person you love, George says, not an input on a balance sheet.

While Vivianco’s relationship did not survive, she says financial imbalance was not at the core of the collapse. “It’s got to be a strong, committed relationship before you jump into supporting someone, not only financially but emotionally, psychologically as well,” she says. She would happily financially support someone she loved again. She would, however, do it a little differently. “I think that if the relationship doesn’t have the proper basis, the proper structure, it’s going to be quite challenging.”

“I don’t think I should expect something to be returned,” she says. “This is what I think brings everything down.” It has to be a gift, she says, made willingly and openly and without expecting anything in return. An action, rather than transaction, in a loving relationship.

“It’s difficult, but otherwise don’t do it. If you feel it’s not going to work follow your gut instinct and say ‘I love you, but I can’t help you.’”

*Names have been changed