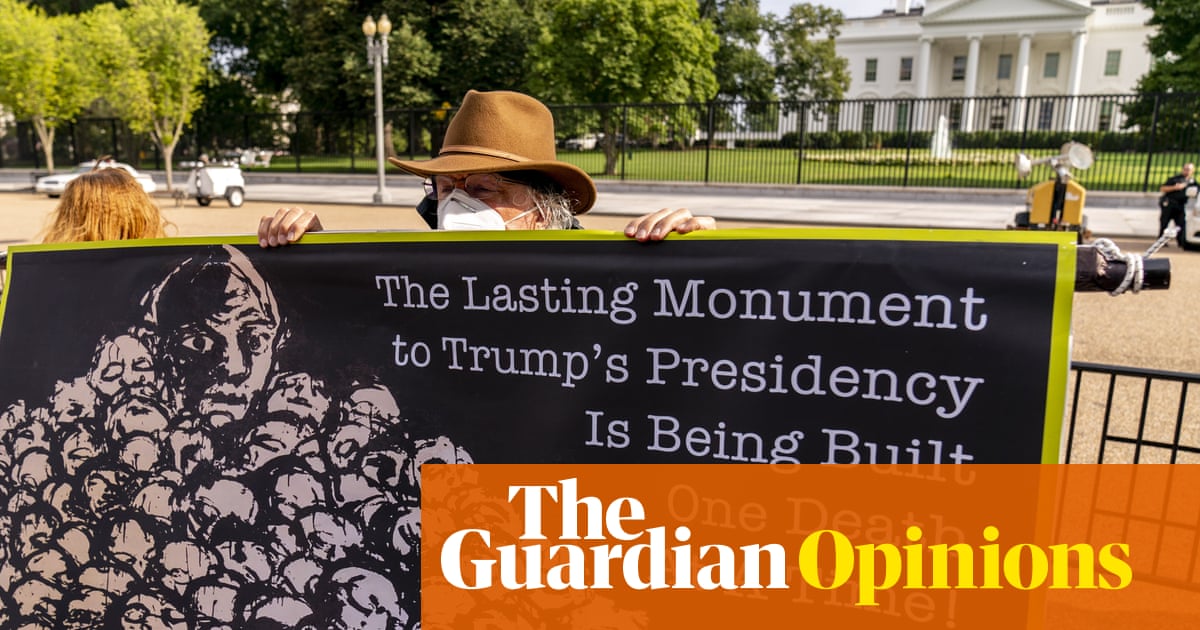 Death is not supposed to be part of the American dream. As the country’s founding document says, liberty and the pursuit of happiness presuppose life. For a culture based on these ideals, death can be hard to confront. Nevertheless, as the official death toll from Covid-19 in the United States passes 200,000, it is time to take stock of how long-running pathologies in American culture exact a price measured in human lives.

Trump’s America first is working: the US now leads the world in coronavirus cases | Richard Wolffe

The United States has now suffered about 22% of the world’s deaths from Covid-19, despite accounting for only 4% of the world’s population. At this stage, all statistics have to be taken with a pinch of salt, but this is nevertheless a stunning disparity. There are unborn historians who will make their careers out of arguing over the precise contribution of factors like climate, geography, genetics and demographics in bringing this situation about. But it would be absurd to suppose that the factors over which America did have control – especially the response of its government and people – won’t form a large part of our eventual understanding.

In no way should victims of coronavirus be blamed for their own deaths – even those who behaved recklessly on the advice of a president who has betrayed their misplaced trust. But when a president can act as absurdly and incompetently as Donald Trump has and still have a nearly 40% approval rating for his handling of the crisis – over 80% in his own party – something strange is going on. What is it?

A big part of the explanation can be found in the ideology of individualism, which also lies behind the collective shrug at the heart of American gun culture. The fundamental argument behind gun ownership is that society must accept high rates of gun deaths in order that the individual right to self-defense be maintained. The gun owner asserts that while his own death would be a tragedy, the tens of thousands of other gun deaths every year are just a statistic. No other country with the capacity to do anything about it accepts such an insane calculus.

The same attitude influences America’s response to coronavirus, especially on the right. Mask ordinances and lockdowns are treated as tyrannical infringements on personal liberty, while a president who dismisses the danger of the problem to society at large is lauded. Those who die are viewed as different, inferior – somehow not like us, the strong ones who survived. Trump’s view that American soldiers who died in battle are “losers” when compared with their brethren who survived is the epitome of a culture that dismisses the coronavirus dead as “only the elderly” or “just those with pre-existing conditions”.


Of course, America is capable of being roused by the dead – if only they are killed by outsiders

Individualism also lies at the root of the distrust and hatred of government which is so uniquely American. In most countries, the government’s duty to protect the population from a deadly pandemic would not be up for debate. But the US government still has no real national plan to beat the coronavirus, and its chief executive is a tragi-comic figure who splits his time between promoting quack miracle cures and telling the states to deal with the problem on their own. Far from being hounded from office, he wins praise from a substantial portion of the population who would rather see hundreds of thousands of their fellow citizens die than admit that perhaps government might be able to make some positive contribution to their lives.

Of course, America is capable of being roused by the dead – if only they are killed by outsiders. When 2,977 people died on 9/11, the United States flew into an era-defining rage, killing hundreds of thousands more, toppling governments and spending trillions. Coronavirus inflicts human losses on America equivalent to a 9/11 every few days, but the only time Trump and his allies seem moved to indignation by it is when they are trying to pin the blame on China. Problems that can be blamed on foreigners are much more psychologically satisfying than those which require self-reflection. It’s easier to blame foreign devils than it is to confront your own demons.

The fetish of individualism and the distrust of government are woven deep into the fabric of American culture, and it will take more than an election to unweave them. Under an administration which actually tried to fight the virus, those who recklessly dismiss it would likely double down on their selfishness. But we can also hope that an effective effort to save lives would spark a renewed appreciation of the virtues of government, of social solidarity over individual indulgence, and of the bonds of union which tie Americans together. It has to at least be worth trying. It would certainly be one way to honor the dead.