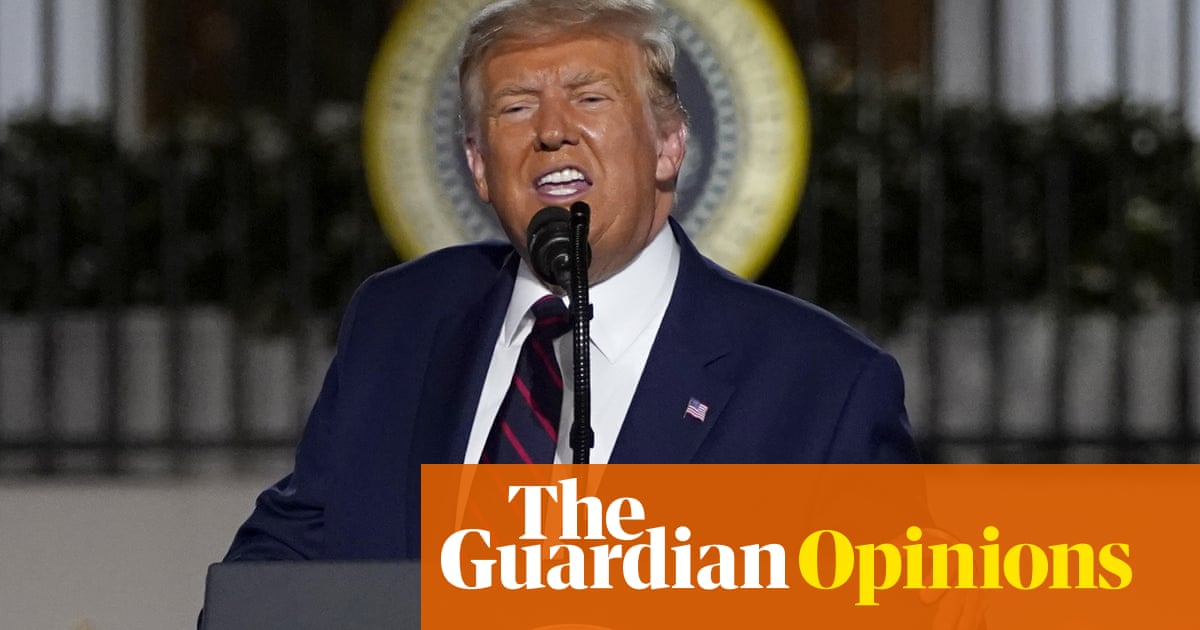 There are lies, there are damned lies – and then there was this week’s Republican national convention: a four-day cavalcade of brazen falsehoods from the president and his enablers. Wild distortions and exaggerations are hardly new to politics. But Donald Trump’s mendacity is in a class of its own, as his closing speech on Thursday underscored.

Facing grim unemployment figures that have holed his plan to run on the economy, he is an incumbent still campaigning as an outsider, and relying on race-baiting, fearmongering and slandering his rival. Joe Biden, previously dismissed as a creature of the Washington swamp, is now portrayed as a Trojan horse for radicals bent on tearing down the American dream. Yet the lies about Mr Biden and the Democrats pale beside those told about Mr Trump’s own record. Empathetic. Feminist. Most remarkably, in Melania’s telling, a man of “total honesty”.

When he announced: “I say very modestly that I have done more for the African-American community than any president since Abraham Lincoln,” it was hard to know whether the adverb or the rest of the statement was the more misleading. The most glaring falsehood is that he took “swift action” to protect his country from coronavirus, instead of effectively abandoning it to its grim fate – 181,000 deaths to date. The Republicans want America to believe that the worst is over, though more than 1,000 people are dying a day.

This refusal to even brush shoulders with the truth looks unhinged to those who revile him. But it may well be effective. He came to power by recognising an underlying truth: many Americans were poorly served by years of economic growth, and could no longer identify with those who purportedly served them in Washington. The conspiracy theories embraced by many of Mr Trump’s supporters make his own fantasies look almost tame. The parallel universe of the convention speaks to those who dwell in the parallel universe of Fox, Facebook and Breitbart, in which facts are optional. The most powerful man on Earth plays victim, claiming that he stands on behalf of the ordinary man against a corrupt elite, and that “They are coming for me because I am fighting for you”.

The convention has sprinkled a little sugar to make him more palatable to those having qualms about backing him. Black and Asian Republicans assured the audience that Mr Trump was not racist, and neither was the country he runs. But seen as a whole, there was an unwitting truthfulness to this week. “When someone shows you who they are, believe them,” Hillary Clinton said of her opponent four years ago.

Mr Trump has never disguised his worst; he was elevated despite, or perhaps even because of that. His speech, like those that preceded it this week, told America what it can expect from him. In context as well as tone it reflected his disdain for democracy. Mr Trump gave it from the White House lawn, using the highest office in the land for partisan campaigning. The GOP adopted no platform this week beyond enthusiastic support for him – an acknowledgment of its complicity in his success and dependence upon him.

In Mr Trump’s own words, “at no time before have voters faced a clearer choice between two parties, two visions, two philosophies, or two agendas”. His presidency has made that clear enough, but this convention reaffirmed what is at stake: the future of American democracy. Though Mr Biden leads in the polls, including in swing states, many fear he is not as far ahead as he needs to be; Mrs Clinton won the popular vote. Mr Trump’s speech was an effective spectacle that may give his campaign some momentum. He urged his supporters to send “a thundering message they will never forget” at the polls. But what matters will not only be how many people are persuaded to vote on 3 November, but how many are allowed to, and whether their votes are recognised. A man as careless of truth as Mr Trump cannot be expected to respect the facts should they prove inconvenient.