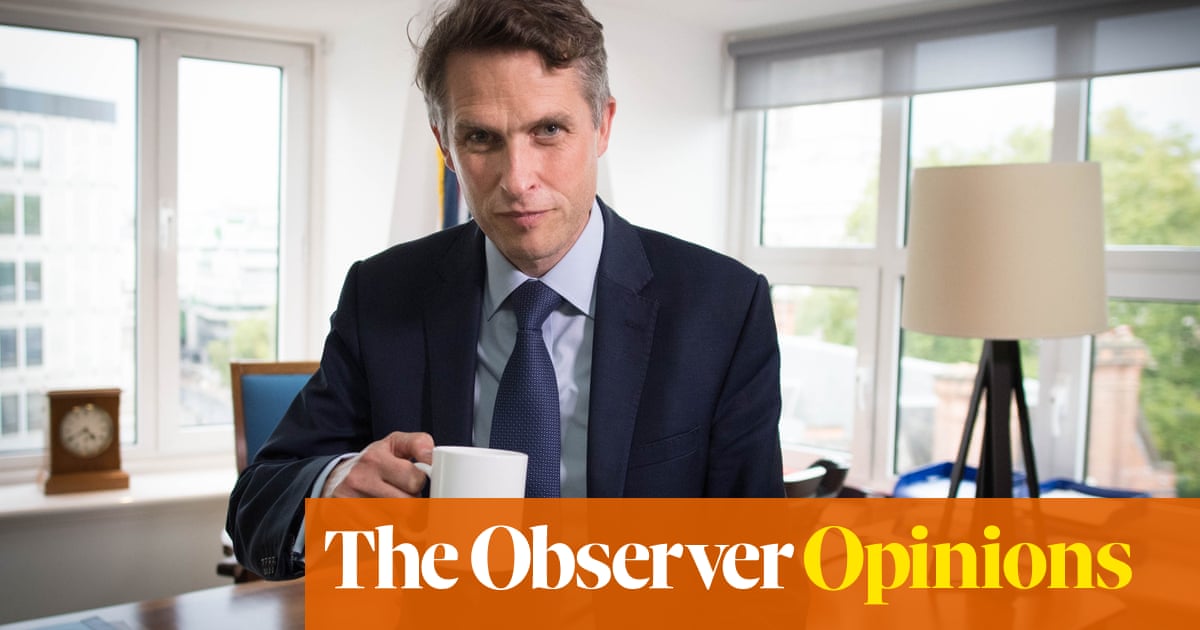 Michael Gove, who likes to think of himself as the philosopher-prince of the Johnson government, recently gave a speech in which he sought to explain why so many voters have “a deep sense of disenchantment” with the way they have been governed.

“Faith in conventional political parties… has been broken” by incompetent leaders who lost the trust of the public with “failures of policy and judgment”, generating a “crisis of authority” that was “compounded by cultural condescension and insulation from accountability”. The public was entitled to expect better from the government of which Mr Gove is a senior member. “Politicians like me must take responsibility for the effect of their actions and the consequences of their announcements.”

Gavin Williamson did not get the memo. Or he took the memo on holiday meaning to read it, but struggled to open the envelope. Or he had a last-minute change of mind about reading the memo. Or he read the memo, but did not understand it. From bungling the reopening of schools to failing to deliver adequate remote learning, the education secretary has presided over several of the most egregious blunders during the pandemic, culminating in the A-level grading debacle that inflicted so much trauma on so many young people. Far from taking responsibility for his actions by resigning, he is still drawing the salary of a cabinet minister, a survival that unites Conservative and Labour MPs in astonishment.

Boris Johnson must also have missed that Gove speech on “restoring nobility to public service”. Otherwise, he would have sacked Mr Williamson for his ignoble failings. The Gove theory that public faith in politics requires competent and accountable leadership from their politicians is a decent one; how unfortunate that he is a member of a cabinet that practises the opposite.

It does so not by accident, but conscious design. Within Mr Johnson’s inner circle, it is a private boast that they are “tearing up the rule book” of government. One of the rules that they have been shredding most aggressively is the concept of ministerial responsibility. Under previous governments of many different complexions, this idea has been central to how democratic politics is supposed to work. When things go wrong, the minister is accountable to parliament and must answer to the public for his department’s failings. When things go badly wrong, the minister resigns. Ministerial responsibility is at the core of the compact between government, parliament and public. Bronwen Maddox, the director of the Institute for Government, has it right when she says: “Unless there are consequences for ministers of the decisions that are their responsibility, the UK’s principles of democratic accountability will become meaningless.”

This government has inverted the doctrine to the point where ministers assign responsibility for misjudgments and failures to anyone but themselves. When searching for somewhere else to throw the blame, their first choice is civil servants, who make convenient targets because they are not supposed to answer back. So out goes Sally Collier, chief executive of Ofqual, the regulator, over the grading fiasco. Following her overboard goes Jonathan Slater, the permanent secretary at the Department for Education, who was sacked in a fashion brutal even by the standards of the current regime. Mr Williamson, meantime, stumbles on towards his next appointment with calamity in an apparent determination to make Chris Grayling feel a bit better about his time in government.

In an even darker part of the forest, there is a manifest effort to manipulate inquiries into the handling of the coronavirus crisis by shifting culpability from the prime minister and his lieutenants. Sir Mark Sedwill was effectively fired as cabinet secretary in June after anonymous briefings to Number 10-friendly media designed to depict him as bearing prime responsibility for the numerous failures to get a grip on the emergency. Public Health England, which is to be scrapped before there is any full accounting of who was responsible for which errors, is also being cast as a scapegoat.

The character of government is shaped by the personality of the person at the top. When he was US president, Harry Truman had a sign on his Oval Office desk that was inscribed: “The buck stops here.” If Boris Johnson had a sign, it would read: “Not me, guv.” Anyone familiar with his biography knows that he does not feel constrained by conventional norms of behaviour and nor will he willingly shoulder responsibility for his bad choices. His career is potholed with scandals, mendacities and betrayals of trust. Having got to the pinnacle of the greasy pole all the same, he has concluded that, providing your skin is thick enough and your reserves of shamelessness are deep enough, there is no scandal so enormous or blunder so titanic that it cannot be brazened out. The law of impunity that he wrote for himself is being applied to his cabinet of loyal mediocrities. Not only does Mr Williamson continue to draw his cabinet salary, Robert Jenrick is still installed in a ministerial limousine, despite having unlawfully approved a £1bn property development.

Mr Johnson is encouraged in this by the gang of Brexiters whom he imported into Number 10. Taking their lead from Dominic Cummings, they have a hyper-aggressive “never apologise, never concede” mindset in which they can never be wrong. The defining non-resignation was that of the prime minister’s chief adviser after the exposure of his lockdown-busting excursions to and around Durham. His contrition-free account of his activities included that “eye-test” defence of his side tour to Barnard Castle, the risibility of this excuse demonstrating complete contempt for any criticism. Mr Cummings refused to resign – and Mr Johnson to sack him – despite days of terrible headlines, serious damage to the government’s public health messaging, hot public anger and furious demands from many Tory MPs that he had to go. By successfully defying that level of pressure, the pair proved to themselves that no one can stop them tearing up the conventional rules about accountability.

Yet there will be consequences for the government’s novel doctrine of total power with absolutely no responsibility. When ministers start thinking that they will never be held accountable for their actions, they are that much more likely to make choices that are reckless, lazy, sleazy or stupid. We have a senior ministerial team that many Conservative MPs regard as extremely incompetent and at the same time this inadequate cabinet is being encouraged to believe that no ministerial screw-up, however grotesque, will be punished. That is a dangerously decadent form of government.

After the purging of five of the most senior officials since April, civil servants have clocked that Number 10’s default response to anything that goes wrong is to fit up officials. They will respond accordingly. Instead of encouraging innovation, initiative and accountability within Whitehall, the professed goals of this government, this will engender a culture of risk-avoidance and arse-covering in which officials make it their first priority to safeguard themselves against being cast as fall-guys. If ministers are no longer willing to defend their civil servants, officials will be less happy to defer to the tradition that they leave quietly when pushed out. Sir Philip Rutnam, the former permanent secretary at the Home Office, is setting a precedent others can follow by suing Priti Patel for constructive dismissal.

Parliament returns this week with a growing number of Conservative MPs anxious that a summer strewn with screeching U-turns and howling errors is giving their government a reputation for blithering ineptitude that is draining away public support. The point of ministerial responsibility is that it acts as a safety valve for discontent. The resignation of Ms Collier and the sacking of Mr Slater will not assuage voters cross about what has happened in education for the simple reason that barely any of the public will have heard of these officials. The Opinium poll that we publish today indicates that voters hold the education secretary primarily responsible for his department’s many failings. It is his head that is demanded by the angry people who have been bombarding the inboxes of Tory MPs over August.

The shrewder people on the Conservative benches know that power without responsibility is a poisoned method of governing that will rebound on their party. A cabinet of blunderers is bad enough. A cabinet that refuses to take any responsibility for its mistakes invites an especially severe verdict from the public.

• Andrew Rawnsley is Chief Political Commentator of the Observer