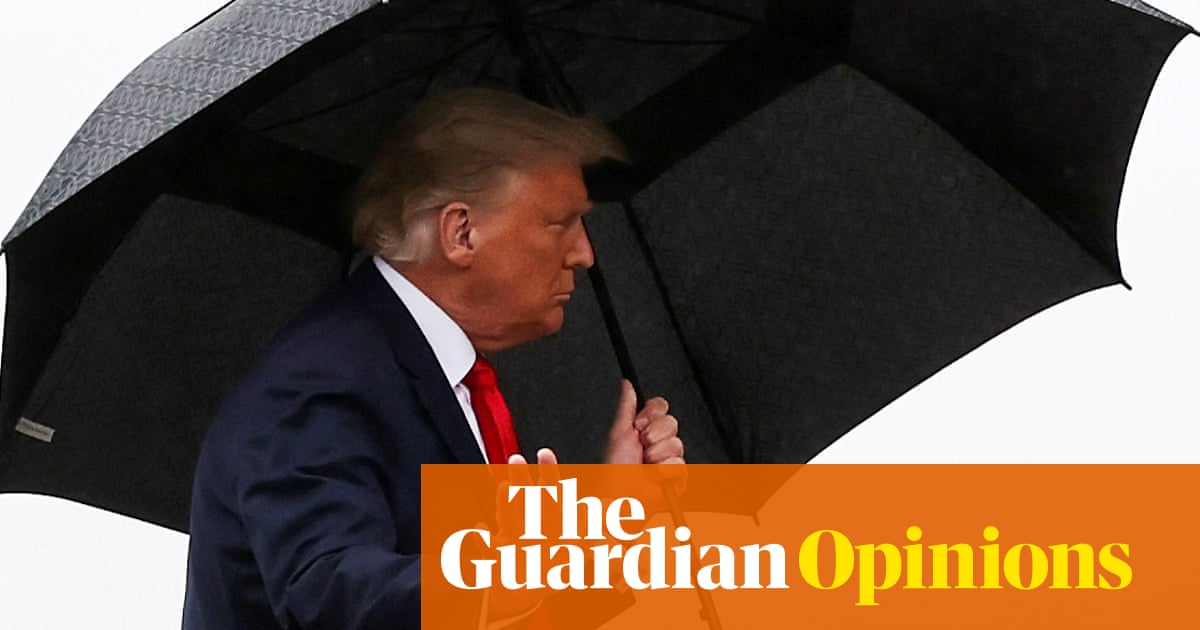 Joseph Biden has described Donald Trump’s refusal to wear a mask as “macho”, an insult unlikely to wound a president, who, before his illness, began rallies with speakers blasting the Village People’s 1979 song Macho Man. These rival spins on machismo – the term, from Spanish, for aggressive, hyper-masculine, testosterone-poisoned swagger – neatly express the two candidates’ differing views of gender dynamics.

This weekend, a New York Times article confirmed what a lot of us probably already suspected: some men, including Trump, see illness as a sign of weakness and mask-wearing as a show of vulnerability, of unmanly fear. The speed with which Trump checked out of the hospital and tore off his mask was an attempt to impersonate an invincible, heroic force.

Trump is determined to be a macho man, and being a macho man apparently entails encouraging the American people, whom Trump is supposed to protect, to disregard wearing masks. Yes, masks – the simple and critical safety protection that the Fox Nation host Tomi Lahren has equated with “carrying a purse” – apparently the meanest thing you can say to a man, in this case Biden.

I would happily see the words “masculinity” and “femininity” purged from our language and our consciousness, since they so often describe the most repressive, restrictive and cliched aspects of male and female behavior. Men knock heads together, women tend their wounds. But at least for now, despite the brave efforts of the trans community and those who resist traditional gender norms, we’re tethered by gender’s tough roots, its tendrils in nurture and nature.

I, for one, just can’t see it: Donald Trump as the masculine ideal. It’s not merely that an unfit old white guy with tiny pudgy fingers isn’t the cowboy-warrior-samurai hero of our dreams. He’s not Gary Cooper or even early Clint Eastwood. But the gaping distance between masculine pretense and reality is about more than just physical appearance.

So much of Trump’s self-presentation (I’m sorry for resorting to the most odious gender stereotypes) seem like a caricature of old-fashioned “femininity”. The prissy delivery, that thing he does with his mouth that’s less John Wayne than Clara Bow or Claudette Colbert. His preening, costly vanity – the makeup, the $70,000 worth of bad hair – is (forgive me, sisters) usually understood as female territory. It’s not that men are never vain – vain about the trophy wife, the haircut, the money, the pickup. It’s how far Trump takes it, and the dangerously high stakes.

So what do people mean when they see Trump as a paragon of masculinity who would choose death before he’d carry a purse? Since he looks and carries himself so little like the intrepid warrior he alone sees in the mirror, the only thing he can do is boil over and erupt – a TV-celebrity volcano, spewing the rock-bottom dregs of old-school masculinity. The aggressive nastiness, the stubbornness, bullying, incivility, the selfishness and self-regard, and above all, the flat-out misogyny – the hatred and contempt for women. How stupid we were to imagine that the Access Hollywood “pussy-grabbing” tape might sink Trump’s candidacy. How naive not to suspect that it would strike an agreeable secret chord with more than a few male listeners.

Like so many of our problems, poisonous masculinity didn’t start with Trump, nor will it vanish when he leaves office. Let’s say, it’s been around. There’s no doubt that things are better for (some) women than they were in the 1950s, when doors were slammed in women’s faces, when there was pressure to stay home, raise the kids, bake the best apple pie. But Trump reminds us daily that misogyny remains.

Further progress will involve a steady pushback against the nastiest ideas of what it means to be a man. That responsibility will be shared by both men and women, teaching our kids the difference between strength and brutality, between respect and contempt, between consensual sex and rape. At brighter moments – however rare, these days – I like to imagine a future in which people see a “macho man” like Donald Trump the way we see Oliver Hardy: the pompous, posturing, clueless member of the comedy team Laurel and Hardy. A figure of fun. Though in this case, our comedian president has done more than amuse us with his faux-macho blowhard bluster. He’s put real children in real cages. He mishandled a deadly pandemic. He’s endangered our democracy and made our lives so much worse.