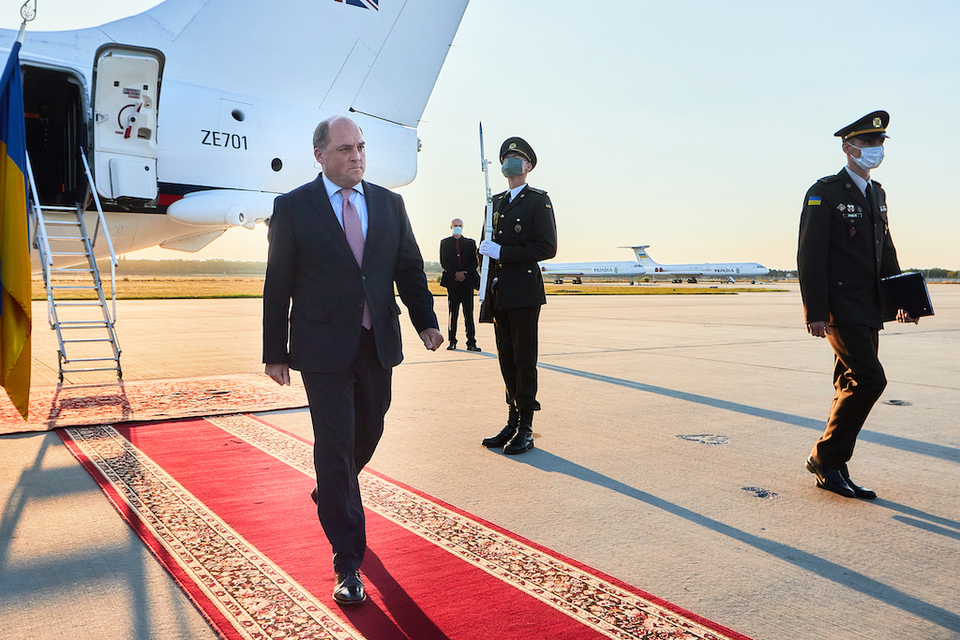 The UK will lead a multinational Maritime Training Initiative for the Ukrainian Navy, boosting their ability to combat threats in the Black Sea, Defence Secretary Ben Wallace has confirmed.

Visiting Ukrainian partners in Kyiv, Mr Wallace also announced that the UK will send Royal Navy ships to visit the region later in the Autumn, where they will train alongside the Ukrainian Navy.

It’s great to be in Ukraine for my second time since becoming Defence Secretary. The Maritime Training Initiative is another step forward for the UK’s defence relationship with Ukraine.

We have already assisted thousands of Ukrainian personnel in a plethora of skills ranging from basic first aid to operational planning, all of which defends their territorial integrity from Russian-backed separatists.

Now, the Maritime Training Initiative will enable even closer collaboration with the NATO Alliance and Armed Forces around the world, and allows us to build on Ukraine’s new NATO Enhanced Opportunities Partner status.

Mr Wallace discussed issues of regional security and areas of mutual interest and cooperation in meetings with defence minister Andriy Taran and Ukrainian commander-in-chief Colonel General Ruslan Khomchak. Beyond the bilateral talks, the Defence Secretary paid tribute to members of the Armed Forces of Ukraine who have died in combat since the start of the conflict in East Ukraine in 2014, laying a wreath at the Hall for the Defenders of Ukraine.

In support of that effort, the Ministry of Defence is increasing its support to the Armed Forces of Ukraine (AFU) by coordinating an international maritime training package that will share the expert knowledge of the Royal Navy and partners from next month.

Courses will be delivered by the Royal Navy and naval personnel from Sweden, Canada and Denmark in areas such as navigation, operational planning, military diving, sea surveillance, fire-fighting and damage control. More nations are expected to join in the near future.

Ukraine lost much of its Navy capability during Russia’s illegal annexation of Crimea in 2014 and Ukraine has since continued to face a rising number of threats in the Black Sea and Sea of Azov. In response, Ukraine has been rebuilding its Navy to protect its economic interests and its right to freedom of navigation. The Maritime Training Initiative will boost that effort, enabling them to uphold the rules based international order and European security in the region on which the UK’s own security depends.

As well as bringing skills, knowledge and expertise to the Ukrainian Navy, the Maritime Training Initiative will empower the Ukrainian Navy to work even more closely alongside international partners in defence of the Black Sea region. This will be in evidence later this year when Royal Navy ships visit the region.

The new initiative will follow the resumption of Operation Orbital, the UK’s training mission to Ukraine, after a COVID-19-enforced suspension. Since the training mission began in 2015, British troops have trained over 18,000 members of the Ukrainian Armed Forces (UAF). Their efforts have made a real difference and saved lives as Ukraine faces down Russian aggression and threats to its sovereignty. Last year the Defence Secretary extended Operation Orbital until 2023.

The UK’s Operation Orbital and Maritime Training Initiative will be complemented by US security assistance support. This will further enhance Ukraine’s capabilities and situational awareness in the maritime domain to more effectively defend itself against Russian aggression. The UK continues to urge all allies and partners to enhance their support for Ukraine.

The strengthening UK-Ukraine defence relationship has seen the UK support Ukraine in its process of conducting vital defence and security sector reform. A Special Defence Advisor has been deployed to Ukraine to assist in this process, which has also been aided by UK representation on the country’s Defence Reform Advisory Board (DRAB), General Sir Gordon Messenger.