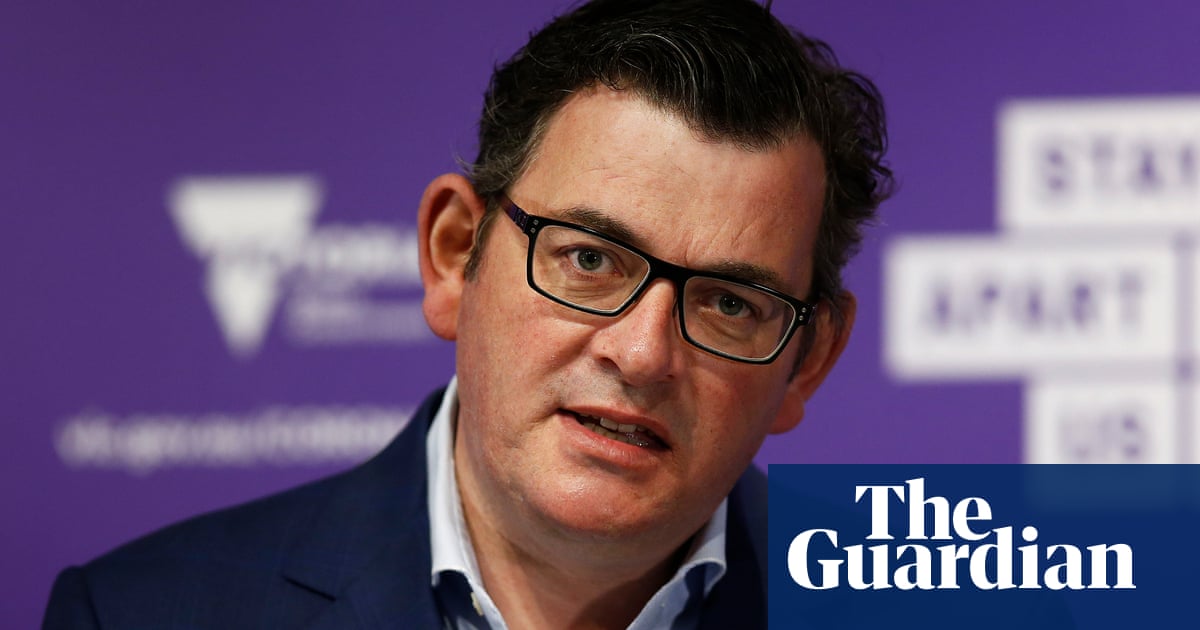 As Melburnians were released from curfew restrictions on Monday, just five new cases of coronavirus were announced – the lowest number of daily new cases of Covid-19 in Victoria since 11 June. There were three deaths overnight.

But metropolitan Melbourne remains under strict travel and outdoor exercise restrictions, with people unable to move beyond a 5km radius of their suburb unless they have a work permit.

The premier, Daniel Andrews, on Monday urged people to continue to come forward for testing as case numbers dropped and some restrictions eased. “If you’ve put off getting a test over the course of this weekend, and you’ve got symptoms, or you had symptoms, please go and get a test today,” he said.

“What could be a challenge for us is if we don’t see people coming forward and getting tested and if we start to have doubts about whether we’ve got the most complete picture, that can be a real challenge.”

The Department of Health and Human Services head of testing, Jeroen Weimar, said one in every 40 Victorians had been tested in the past fortnight.

The 14-day average in metropolitan Melbourne is now 20.3, and 0.6 in regional Victoria, while there are 31 cases where no source of the virus has yet been identified.

“Their positive diagnosis and their story about who they have been in contact with is worth infinitely more than $5,000. That has always been the view. I know that seems counterintuitive. We could all feel better if people who were doing the wrong thing got fined.”

In conjunction with announcing on Sunday that some restrictions would be eased, Andrews announced the state would increase fines for breaching rules around restricting gatherings to almost $5,000. Andrews asked whether onerous fines might deter people coming forward for testing or being honest about where they had been.

He acknowledged that people with the virus being honest about their movements was essential to preventing virus spread, but added: “Beyond that, though, one sure way that you cannot be contributing to the spread of the virus is to follow the rules.”

While Andrews has emphasised that along with individuals doing the wrong thing, including people meeting in carparks at McDonald’s, workplaces have been a major driver of spread during the second wave in Victoria, especially in healthcare settings.

On Sunday he announced 127,000 workers can return to various industries, including supermarket, food distribution, food processing, manufacturing and some solo outdoor employees. He did not rule out making testing compulsory for some workplaces but said he believed they were now safe.

“I think that those high-risk settings as we’re here today are more Covid-safe than they’ve ever been, and I’m very grateful to them for the work that they’ve done,” Andrews said. He acknowledged that of the five new cases announced on Monday, it was likely that some were linked to aged care.

Andrews was asked why people were still required to wear masks when outdoors and walking especially in regional areas, when they were far away from other people. Andrews described the question as sparking an “esoteric debate”.

“Maybe there will be a time when we have the luxury of having those sorts of debates … You wear a mask because it’s of some benefit. How much benefit? It’s always difficult to – as I’ve said to breakdown all the things we’ve done and have an absolute percentage benefit that’s attributed to each one, [that’s difficult].”

Andrews said he had still not spoken to his former health minister, Jenny Mikakos, since she resigned on Saturday off the back of his evidence to the hotel quarantine inquiry, which is hearing closing statements on Monday.

“I have lot of things to do,” Andrews said. “She is focused on the next chapter of her life. I will speak to her at some point, I’m sure.” Andrews was also pressed on why he said he had full confidence in all of his ministers a day before he described Mikakos as “accountable” for the hotel quarantine program.

“I’m not going to offer a commentary on this any longer,” Andrews responded. “The minister resigned. I gave evidence in full, frank, honest terms.”

Meanwhile a legal challenge to the curfew due to begin in Melbourne’s supreme court on Monday may still go ahead, with the parties to return to court at 12.15pm to finalise if the case will proceed. The curfew lifted at 5am on Monday, just five hours before the action brought by a Mornington Peninsula cafe owner and Liberal party member, Michelle Loielo, was due to begin.

She had asked for the order to be quashed, or that there be a declaration the curfew was inconsistent with her human rights. On Monday morning her barrister, Marcus Clarke, described the announcement by Andrews scrapping the curfew on Sunday as a surprise.

He asked the court to give him until midday to “reflect on the repercussions” of the announcement.