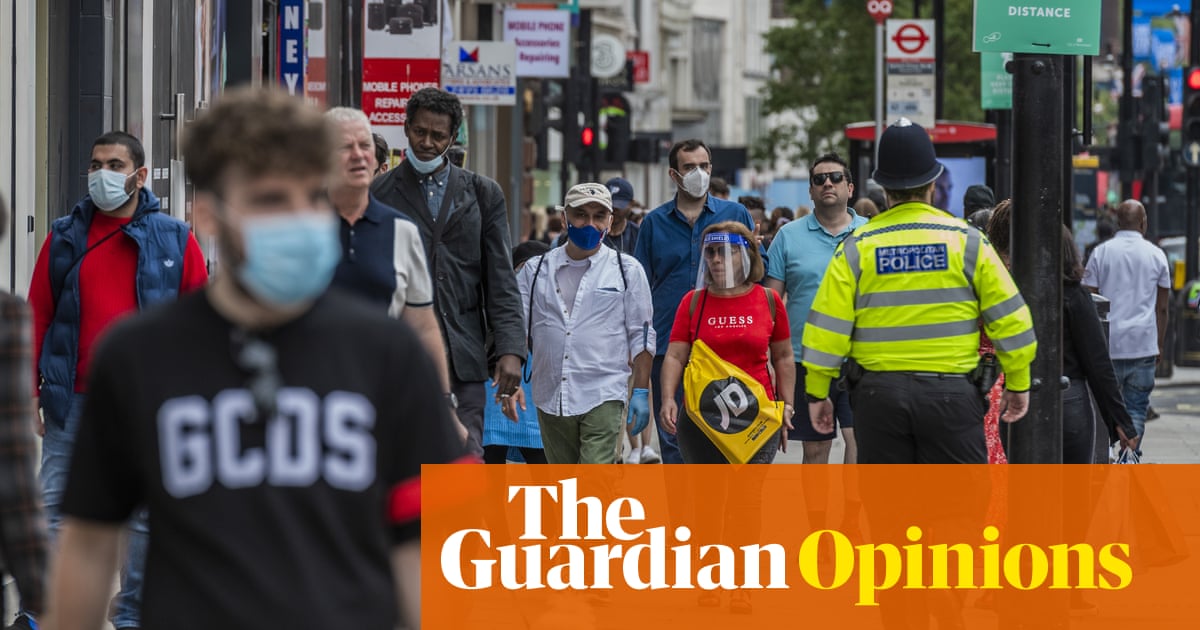 Welcome to no man’s land. This is where we live now, territory full of dispute and uncertainty. After the exams fiasco, when we were all rightly concerned that a generation of kids had been abandoned, I had a bit of a dip. It’s not just kids who have been abandoned, is it? It’s all of us. We have been left to get on with working out a way to live while members of the government are either on holiday, rushing back from holiday or in quarantine. God knows. What difference does it make?

No one seems to be in charge of anything. Schools will open and that’s all fine apparently – which is funny, as nurseries keep having to close down every time a little kid tests positive. Half the guidance is mere suggestion. No one wears masks where I live. Small, unventilated restaurants are packed. An illegal rave would probably be safer than buying carrots around the corner from me.

This current easing of lockdown is proving more stressful than actual lockdown because everyone is doing it differently. Many who are still shielding feel worse than ever, as a semblance of normal life resumes for everyone else.

Instagram is full of pictures of someone in an art gallery again, or having the tasting menu. Who are these super-organised folk, I wonder enviously, who book time slots and tables and fly to their villas? Enjoy it now, because winter is coming; squeeze out the last drops of summer, I say! Also: oh, you invincible fools. I think both these thoughts at the same time.

Then I accidentally hug a mate who has been made redundant. Is that risky? We sit in my garden and drink and smoke for England afterwards, because we are anxious about our health.

None of what I am doing makes sense any more. I have simply made my own set of rules and watched while others do the same. A young woman told me the other day that a guy she liked on her dating app had informed her he didn’t believe in coronavirus, which had put her off slightly. But only slightly.

Other people I know have been virtually housebound since March and know they are in for the long haul. Of all the inequalities this crisis has exposed there are always more: the vulnerable who did not seem so vulnerable before; so much invisible illness. A chasm has opened up between those who know someone who has been very ill or died and those for whom the virus remains an abstract concept.

Abandoned to our fate, there are no press conferences, little new information unless one chases it: there are fewer deaths now, but still infection hotspots. Leaked government memos paint the nightmare of a second wave with a no-deal Brexit, shortages of food and drugs, the army on the streets. Still, we just have to get on with it, don’t we?

Left to our own devices we are evolving a new set of social rules: no more shaking hands and mwah mwah. That’s about the only good thing to come out of all this. No more sharing food. No more clinking glasses for a toast apparently – since I read that that was bad I have had an urge, for the first time, to make endless toasts. No more hugging random babies. No more business cards. Well, they were always a sign of viral unpleasantness, surely? No more having to make up reasons as to why you don’t want to go to someone’s stupid wedding. No more pretending that you actually have to be present at a pointless meeting.

Some of this new world appeals to me. Other bits really don’t. I keep trying to do socially distant tipping for takeaways in an uneasy dance on the doorstep. I try smiling with my eyes to say thank you in shops when I have a mask and sunglasses on. I am planning a full balaclava for winter.

All the little ways we rub along without actually touching are fraught, though. We need some new etiquette, although, as Quentin Crisp once said: “Nothing more rapidly inclines a person to go into a monastery than reading a book on etiquette. There are so many trivial ways in which it is possible to commit some social sin.” The current moment is a minefield, but as Crisp, my guru, also said: “Manners are love in a cool climate.” The coolest of climates is one in which the breath of a stranger may be dangerous, so to talk of love may seem odd. But I do think of love and the manners we need to maintain it.

The biggest challenge is social gatherings. For this is what could be lost for a long time: the feeling of being in the presence of many others, on a dancefloor or at a gig, in a packed cinema or a rapt audience, part of something huge. The concentration, the entrancement, the joy of a crowd. The live event that can no longer be. The feeling of losing oneself, the thrill of anonymity, the sense of being in a moment with others that will never, ever be repeated. This is life itself to me.

Raves, masked and sanitised dancing in nightclubs – sure, this is happening again. Crowds assemble to protest, too, in Minsk and in Portland. No virus will stop the need for these things.

The no man’s land now exists between those who will socially distance for as long as they need to and those who will take risks because they refuse to live this way any longer. Thus the risk never, ever goes.

For the first time in my life I want someone to tell me exactly what to do.