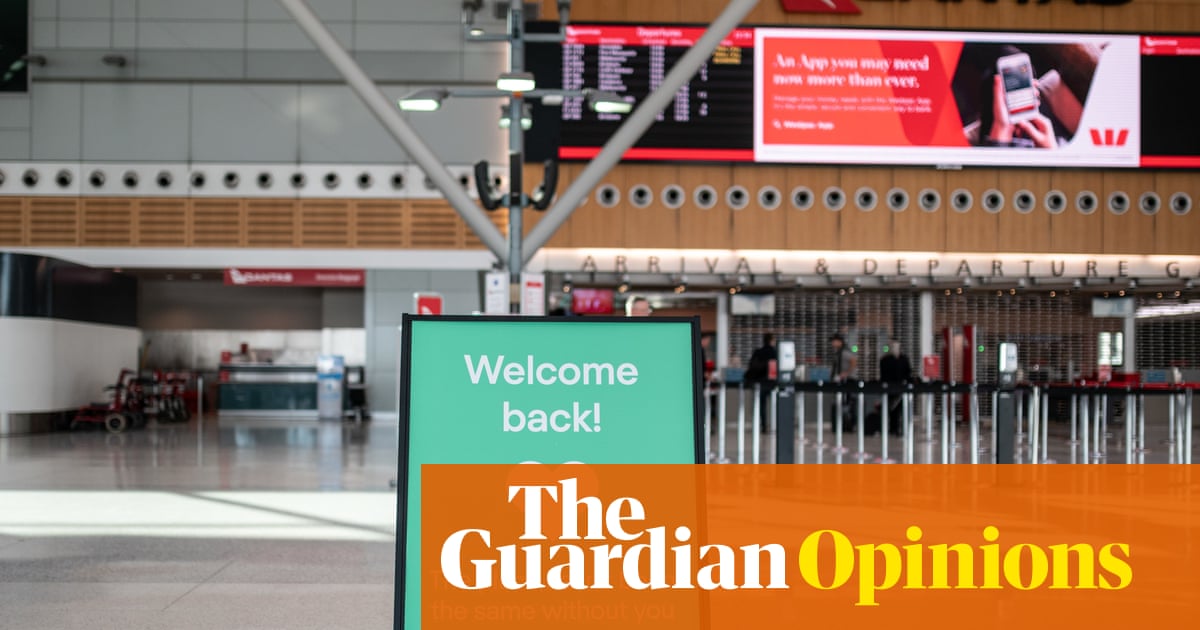 It is the mark of a privileged person, in the Before Times, that they never really had to think about borders. Their passport has allowed them to go pretty much anywhere, and to come and go from their home country as they pleased.

Until Covid-19 hit and borders became hard, many Australians held, at least in their minds and imagination, a sort of dual citizenship. The first citizenship was Australia, a citizen of the world was the second.

If you came of age in or after the 1990s, reciprocal working visas, cheap flights, the opening up of the international job market and the subsequent ease of movement lulled lucky Australians into thinking that borders were irrelevant.

For the rich, talented, well-connected, well-educated and those under 31, visas for Australians in places such as the UK, Canada, the US and Europe were easy enough to come by.

Dubbed “gold-collar workers”, so many Australians enjoyed the fruits of participating in a global economy that by 2004, a Senate committee was set up to quantify the number of Australians that had left and to investigate how their skills and experience might one day circulate back into the Australian job market and economy.

By 2018 there were estimated to be around one million Australians living and working overseas.

Freedom of movement was a right that was so fundamental as to be barely considered.

That is until this year, when Australia became one of the only democracies in the world that has effectively banned its citizens from leaving the country.

Now an Australian citizen or permanent resident is not permitted to travel outbound unless they apply to Border Force for an exemption. The criteria is strict.


For sound public health reasons, we’ve built a fortress unlike anything experienced in our lifetimes

This long run of hypermobility – ruinous for the environment with all those flights but enriching for those selling their skills to the highest bidder in the global marketplace – came to a dramatic halt on 25 March.

What a strange thing it is to log on to Instagram these days and see your British or European friends enjoying holidays on Greek Islands or in Portugal, while we’re locked in our own country.

For sound public health reasons, we’ve built a fortress unlike anything experienced in our lifetimes. Almost no one gets in and no one gets out.

So far there’s been widespread public support for such far-reaching measures. And in Australia, like New Zealand, there seems to be some antipathy towards those who are stuck overseas and trying to get back in.

They had their chance in March, goes the refrain from politicians, including the prime minister and New South Wales premier. Suck it up.

An Essential poll has shown last week that a majority of respondents support a hardline approach on border closures. Whether this is due to concerns about more virus getting into Australia, or latent, cultural resentments about those who leave – a new manifestation of tall poppy syndrome – it’s hard to say.

The recall of expats, the lack of tourists climbing the Sydney Harbour Bridge or visiting Bondi Beach, the suspension of plans to study overseas, or take a job in the New York office, or spend a year travelling around Asia – is this what the end, or at least the unwinding of a key aspect of globalisation looks like?

The notion of the border as the prime organising principle of its citizens – wealthy and poor – has come as a shock to many children of globalisation.

The idea of keeping its citizens in and outsiders out (even if these outsiders are Australians travelling or living abroad), is profoundly alien to a generation that has taken unfettered freedom of movement for granted. A shift in the national psyche is sure to follow.

As English political philosopher John Gray wrote recently in the New Statesman: “Harder borders are going to be an enduring feature of the global landscape.”

He calls the pandemic “A turning point in history. The era of peak globalisation is over … A way of life driven by unceasing mobility is shuddering to a stop. Our lives are going to be more physically constrained and more virtual than they were … most of humankind is not willing to return to the small, closed communities of a more distant past. But the hyperglobalisation of the last few decades is not coming back either.”

While for years Australia and New Zealand has suffered from a brain drain as some of its brightest and most educated citizens left for bright lights and big salaries, now many are returning home.

New Zealanders who’d made international reputations in law, hospitality, business and media are coming back, and in this “brain gain” there is “staggering potential” – not just economically but also culturally.

But for those just embarking on their travelling years or who want to have international careers, these things have suddenly become almost impossible at the moment – and potentially a lot harder in the future.

Will the knock-on effect be a more insular, less entrepreneurial and dynamic population, if we can’t get out there and experience the world?

For a nation whose young have embraced freedom of movement so enthusiastically, the effects of a hard border won’t just upset potential travel plans, but shift something in the imagination too; that we could go anywhere, anytime. All you needed was a plane ticket.

Coronavirus live news: UK at ‘critical point’ in pandemic as US nears 200,000 deaths